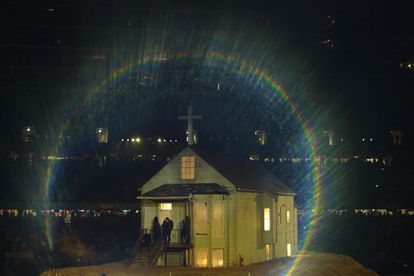 An image from Kanye’s ‘Donda’ launch
Image via Instagram
@kimkardashian

An image from Kanye’s ‘Donda’ launch
Image via Instagram
@kimkardashian

Kanye West’s latest album, Donda, has been released to critical acclaim this week following no less than four listening parties…

The album features 27 tracks with collaborations with other hit artists like Travis Scott, Kid Cudi, The Weeknd and many, many more.

It even broke a record for becoming Spotify’s second biggest debut of all time with over 100 million streams in a spate of 24 hours!

But there are a number of celebs who are not happy with Kanye or Donda...

Fellow rapper Soulja Boy has publicly lashed out after he claimed Ye dropped his verse from their track Remote Control, WITHOUT telling him

In a series of explicit tweets, Soulja alleges Kanye approached him to feature on the album in a text message and then cut the verse he recorded following the album’s release this week.

“idk how to feel, Kanye sent me that song ‘remote control’ and I don’t hear my verse on it… hmm f* that n**” he tweeted.

Soulja even leaked the verse he supposedly wrote and rapped for the track.

And Chris Brown is sharing his pain – and fury – too.

The R&B singer alleged the same thing happened to him – a verse he recorded for the track New Again landed on the cutting floor.

“Kanye a whole hoe,” Chris posted on his Instagram Story in response to the alleged snub.

And that’s not all. One tweep revealed all last-minute changes Kanye allegedly to the album.

And if the Donda diss were not enough to surprise the public, news that Ariana Grande does not in fact appear on the album will

Despite receiving a credit to the track Donda, the singer distanced herself from claims her vocals are used in it.

Ariana set the record straight on her Instagram Stories where she reposted a picture from a singer named Stalone who claims she recorded the vocals for the track.

Stalone even took to Twitter to reveal she was flattered at the Ariana Grande comparisons.

KANYE CLAIMS DONDA WAS RELEASED WITHOUT HIS PERMISSION

Meanwhile Ye has claimed that Universal Music released Donda without his permission.

He also claims the record label tried to “block” his collab with controversial artists DaBaby and Marilyn Manson.

He posted on social media: “Universal put my album out without my approval and they blocked Jail 2 from being on the album.”