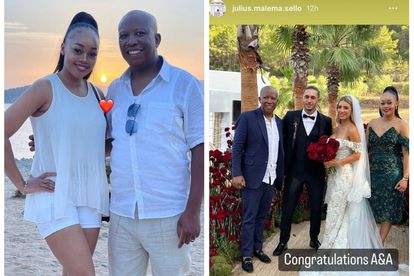 Julius Malema has defended his attendance of a wedding in Ibiza, insisting it was self-funded.
Image via Instagram
@julius.malema.sello

Julius Malema has defended his attendance of a wedding in Ibiza, insisting it was self-funded.
Image via Instagram
@julius.malema.sello

Pictures and videos of Julius Malema “living his best life” in Ibiza have had the Twitter timeline talking…but is the criticism warranted or not?

The EFF leader and his wife visited the Spanish party island after attending the wedding of close friend Adriano Mazzoti’s daughter.

Mazzoti is a controversial South African businessman who owns the tobacco company Carnilinx.

MALEMA PARTIES IN IBIZA – AT ‘HIS OWN EXPENSE’

Over the past few days pics and clips of Malema partying in Ibiza – including spinning the decks and downing shots – have gone viral.

Also in Ibiza at the function were Major League DJs, Black Coffee and his son Anathi and the husband of Tamary Green Ze Nxumalo.

Malema and Mazzoti’s friendship goes back many years to when the outspoken politician was still in the ANC Youth League. According to News24, Malema and his family live in a luxury Hyde Park house that belongs to Mazzotti, who once also donated R200 000 to fund the EFF.

The publication added that Mazzoti admitted criminality to the South African Revenue Service (SARS) in 2014. In an affidavit, the wealthy man admitted to being complicit in fraud, money laundering, corruption, tax evasion, and bribery.

However, Malema has  insisted he footed the bill for his and his wife’s travel expenses to Ibizia. “He is funding it himself. He is working very hard [and] he is warranted to take a break when he feels like it,” EFF spokesperson Sinawo Tambo told News24.

TWEEPS ARE NOT CONVINCED

But despite the insistence of Malema that his trip abroad was not funded by Mazzoti, Twitter users are not convinced.

@goolammv: “Gayton McKenzie is changing the lives of the people on the ground. EFF cult leader Julius Malema is partying and drinking in Ibiza”

@Jawz_Boyson: “Malema decided to travel to Spain, Ibiza. I wonder why he did not visit the Congo or Ghana since he’s an ‘Africanist’”

@SbuSondiya: “Capitalist revolutionaries. They would rather drink expensive wine and wear expensive clothes, while there is no water for masses”

@NalaThokozane: “Julius Malema placed himself in a seriously compromising position. stupid move. Travelling to Ibiza for the wedding of Mazzoti’s daughter will make a nice sound bite for his detractors for years. Correctly so”

@SpNtloko: “This is disingenuous of my leader, is not about him being on holiday but his affiliations. Malema once denounced The Mafia boss called Mazzotti when he was interrogated about his donation to the movement”

Fighters: We do not share the room with capitalists.

Malema on his way to Ibiza with Mazzotti ???? pic.twitter.com/JZVu0wCXST

Gayton McKenzie is changing lives of the people on the ground. EFF cult leader Julius Malema is partying and drinking in Ibiza. #MalemaIsAnAlcoholic pic.twitter.com/Bd4H9jEKhQ