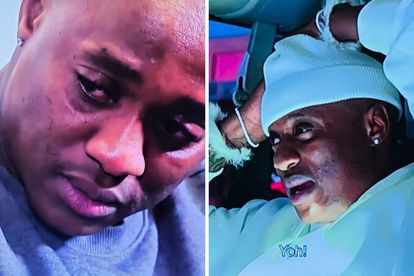 Viewers have reacted to Sunday night’s episode of ‘Uyajola 9/9’ which saw host Jub Jub cry in front of a family.
Images via Twitter

Viewers have reacted to Sunday night’s episode of ‘Uyajola 9/9’ which saw host Jub Jub cry in front of a family.
Images via Twitter

It was another rollercoaster ride of an episode for Uyajola 9/9 on Sunday night, presented by host Jub Jub.

But whilst we did not see any fists fly on the Moja Love reality show, viewers did witness the presenter shed a few tears when it came to addressing a man and his mistress.

On the first installment of Sunday’s episode of Uyajola, a viewer named Senneth told Jub Jub how he was keen to confront the man who was sleeping with his wife.

According to the man, his wife was forthcoming about her affair with a married man, who often visited their home and bought her groceries. An unemployed Senneth also claimed that even his children and neighbours had disrespected him over this brazen act of adultery.

Jub Jub managed to get Senneth and his wife as well as the man and his respective wife in one room, where they attempted to hash out their conflict.

Speaking to the man who was bedding Senneth’s wife, Jub Jub hinted that the scenario may have hit a little too close to home for him.

He said: “I’ve been through a lot of difficulties in this world. My heartaches because what is going to happen, it’s not going to come to you. It’s going to affect the children. That’s Karma. And once it affects them, you’re going to remember all the things that you did”.

Jub Jub then chastised the cheating couple, and in particular the man. He added: “A person whose willing to kneel down and ask for forgiveness if they’ve made a mistake [is a real man]. And asking for forgiveness does not make you less of a man”.

Having been accused of being a “serial cheater” himself, many tweeps have claimed the Uyajola 9/9 episode was “personal” for the Ndikhokhele hitmaker.

According to Sunday World, Jub Jub’s own parents Sydney and Jacquiline aka “Mama Jackie” were also embroiled in a bitter divorce battle earlier this year.

In court documents, the couple – who were married for 36 years – claims to have “drifted apart”. A Pretoria Regional Court judge ordered Sydney to pay Mama Jackie a monthly spousal support and half his pension fund.

But is this the reason for Jub Jub’s reaction on Uyajola 9/9? Or was he simply sympathising with the broken family?

Here’s what tweeps had to say about the episode.

@nkosanap: “This is personal for Jub Jub. It cuts too deep”

@zipppiiiiiii: “Jub Jub is crying because he understands the chaos, hurt and endless pain the actions of a self people, unleash on innocent people. He was one of those self pleasing, selfish people and his actions changed peoples lives forever”

@f_shadung: “Wow what an emotional show! Tto think that the wife is not even showing any remorse, and Jub Jub in tears I thought I’ve seen it all, but I was proven wrong”