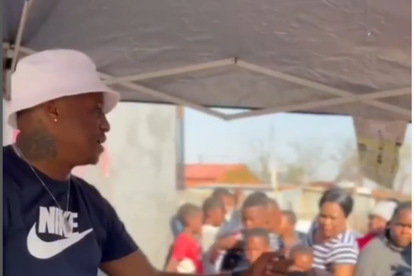 Jub Jub is doing good for the less privileged. Image via Instagram: @jubjub

Jub Jub is doing good for the less privileged. Image via Instagram: @jubjub

South African musician and TV presenter Jub Jub has done a good job at laying low following the rape allegations leveled against him by his ex-girlfriend Amanda du Pont last year. The Uyajola 9/9 presenter made a quiet comeback to social media a couple of months ago and is seemingly spending his time doing good for the less fortunate – or at least this is what he was recorded doing in a video that he shared on his Instagram on Saturday 4 June this year.

Jub Jub does a bit of charity

41-year-old Molemo Maarohanye – who is well known by his stage name Jub Jub – is seemingly making a comeback following several allegations that were levelled against him in 2021.

The controversial TV presenter took a break from the spotlight almost immediately and after four months, decided to return to social media.

Many of his posts following the allegations have seemed very sincere as he works on projecting a new image of himself to millions of shocked South Africans who watched the drama unfold after he sat down with MacG for an interview.

ALSO READ: Where is he now? ‘Uyajola 9/9’ star Jub Jub is missing in action!

One of the ways he is showing remorse is seemingly by doing a bit of good for the less fortunate.

Taking to IG last weekend, Jub Jub shared a video of himself dishing food into takeaway containers for dozens of people.

under the belt…God keeps on doing great things

The post definitely scored him some brownie points with his many supporters who loved the fact that he is working so hard to restore his image.

A number of them shared comforting words of encouragement and support as they wished him well.

“We all deserve a second chance.”