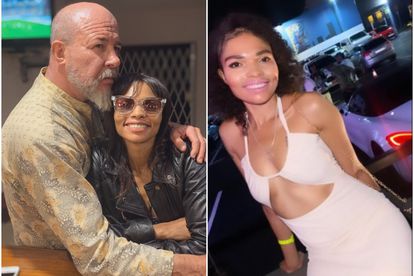 The late actor Jamie Bartlett and girlfriend Rosa Onious were in a two year relationship.
Image via Twitter
@jambarts/Instagram @rosa_lixious

The late actor Jamie Bartlett and girlfriend Rosa Onious were in a two year relationship.
Image via Twitter
@jambarts/Instagram @rosa_lixious

The sudden death of veteran actor Jamie Bartlett on Monday evening comes as a shock to South African fans.

This, especially as the TV star – popularly known for his role as “David Genaro” in soapie Rhythm City – made a public appearance just a day earlier.

Jamie Bartlett was 55 years old and in a relationship with retail manager Rosa Onius who is 29 years old.

On Sunday night,Jamie Bartlett made a public appearance at the Lifestyle Brooklyn club in Pretoria. The celebrated actor appeared alongside Somizi and his girlfriend Rosa as the group partied in VIP.

On Monday afternoon, hours before news of Jamie’s death broke online, Rosa shared a clip of their time in the club.

She posted in the caption: “About last night at @012_lifestyle_brooklyn. Champagne poppin. @realjamiebartlett Thank you for making my night extra special as always”.

The video was set to the song Champagne Life by Ne-Yo and saw Rosa sipping from a bottle of Moet champagne as Jamie Bartlett was seen in the background.

Somizi also shared images of the appearance. He wrote alongside a pic of the pair: “And just like that. Last night would be the last night together literally. I even made fun of you for greeting each and every person [at] @012_lifestyle_brooklyn. Including the kitchen staff. Your spirit knew…..farewell my Jamie”.

At the time of his death, Jamie Bartlett was in a two-year relationship with Rosa. The star was once married to fellow soapie actress Camilla Waldman and they share a son Hector Bartlett together.

In 2019, Jamie Bartlett and Rosa began dating after reconnecting following a meeting in a Melville club over a decade ago.

Jamie told You magazine of their romance: “We haven’t been apart since the day we reconnected. I have a partner in crime, a best friend, and the best lover I’ve ever had.”

In pics posted on her Instagram account, Rosa – who has four young children – revealed that she was regularly spoiled by pricey gifts bought by the actor.

In his last Instagram post with Rosa earlier this month, Jamie Bartlett called his girlfriend his “everyday crush”.

He posted: “Life is better with my everyday day crush by my side”.