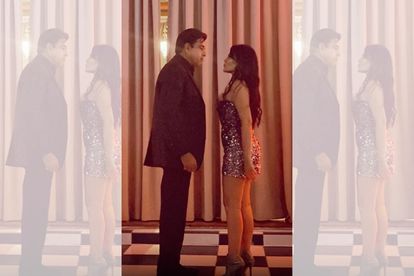 Only weeks before the arrest of businessman Iqbal Sharma due to alleged fraud and money laundering and his apparent ties to the Gupta family, his RHOJ wife shared a special video of the two of them doing the tango at her lavish birthday party.

Last week Friday, the National Prosecuting Authority (NPA) seized more than R47 million’s worth of Gupta-linked assets. Investigator Thesele Rankuoatsana appears to have helped the authorities track down at least R500 000 worth of moveable assets. Some of the items included furniture, jewellery and Sharma and Patel’s R12 mansion in Sandton, reports The Citizen.

Now, the couple’s take on the popular dance has made headlines.

In the past, Patel – who also appeared on season 2 of Real Housewives of Johannesburg – and her husband threw lavish parties at their home. The couple also showed off their home during an episode of Top Billing – which has proven to be a key feature in the ongoing investigation. Patel took presenter Jonathan Lee Boyton on a tour of the house in which she identified certain valuable movable assets and furniture.

The couple’s take on the tango appears to be in celebration of Patel’s birthday. In a separate post she captioned it: “Happy bday to ME…Many thanks to everyone for all the love. Mine is a life well spent.”

Getting to know Tarina Patel

In season two of the reality show, Patel said that although some people may think she’s a bit of a snob, a majority of the public adore her. She also makes it clear that what she utters out her mouth is not said as a way to demean those who have less than her, but, it is a testament of how she lives her life.

“People tell me that I’m the best thing ever, I’m the real sh*t and that I’m the only one who deserves to be there (on the show). But on the other end, it’s the case of people appreciating my sophistication and elegance that I bring to the show. All of what is said to me is just an extension of who I really am. So what you see on the show is what you get in real life, I’m just really being myself. ”

In the first episode of the second season, Patel made a statement that had viewers shocked and somewhat impressed with what she said about a nine to five job.

“I do not have a nine to five. I don’t know what that is. I see it around me, I believe it exists, but, have no personal interaction or personal experience of this nine to five.”

In 2019, Showmax asked the Bollywood actress to elaborate on that statement and to confirm if she really has never had a nine to five job.

“The reality is that I hated getting up in the mornings for school. So I decided at a very young age that whatever I did in life, I will not be dictated to by an alarm because sleep is very important to me. I do not wake up to a clock, and you will not find me waking up to any alarm clock. I wake up when my eyes open.

“I function well, and I look fabulous because I get a decent dose of sleep. So, whatever I was going to do in life, it was going to be on my own terms, and I’ve lived by that. I’m living my life as I see fit, as per my set of circumstances and my vision. I’m very productive, I have a fantastic day, and no one can accuse me of not being productive. And yes, some people might see it as a luxury, but it is, what it is.”