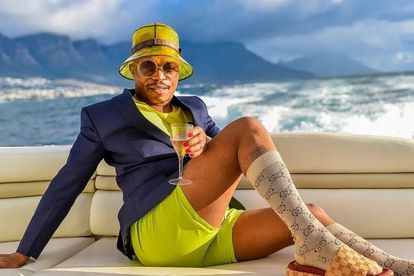 If there’s one thing about Johannesburg CBD it’s that it is truly one of the scariest places in South Africa. Over the years, thousands of people have been robbed and attacked by merciless thugs who don’t care who sees them doing their dirty deeds. Somizi recently had his fans laughing out loud after he headed online to share just how scared he is of the dangerous City of Gold.

Somizi details his fear of the Jozi CBD in hilarious clip

If you aren’t scared of visiting the Johannesburg Central Business District then you probably haven’t been there.

You also probably haven’t heard the horrendous tales of those who suffered at the hands of fearless criminals who roam the busy streets looking for their next victim.

South African media personality has definitely heard the tales after he headed to Instagram to share how scared he is of the business hub.

ALSO READ: ‘Why?!’: Somizi grills nosy clubgoer for filming him and his new bae [watch]

In a hilarious clip, Somizi shares how he went there to collect some important stuff. He then explains that he had to put some Louis Vuitton bags in the boot but he is terrified for various obvious reasons.

He then explained how he used to visit the area often with his parents when he was a child but he is still as scared as ever. He even went as far as to say that he would rather walk among lions than walk in the CBD.

“Tell you about Joburg CBD, It scares the living sh*t out of me. It’s as if I did not grow up around here. I grew up coming here with my parents every Saturday or month-end but yooooh I am terrified,” he said.

Many people feel the same

Soon people in the comment section shared how they too were scared of Jozi’s CBD. Many of them shared stories of robberies and crimes that took place which they witnessed themselves.

“Just this morning a guy was mugged right in front of me at gunpoint, last year October I was mugged, I’m terrified of the place but I have no choice.”

Ramaphosa saga: Phala Phala debate to be held at Cape Town City Hall – here’s what you need to know about the venue

Could Kaizer Chiefs be targeting this surprise ex-Pirates player?

WATCH: Ramaphosa has the Rand in his hand [VIDEO]