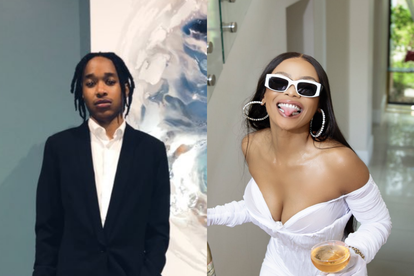 Rea Gopane refuses to give Bonang a cent. Image via Twitter: @reagopane/@bonang

Rea Gopane refuses to give Bonang a cent. Image via Twitter: @reagopane/@bonang

Earlier this week, Bonang excitedly celebrated the fact that she had won a case against YouTuber Rea Gopane. The judge ordered the young content creator to pay the media personality a whopping R300 000 after he was found guilty of defamation of character. He has since said that he will not be paying a cent to Bonang.

Meanwhile, South Africans have continued to share their thoughts on the matter in various social media posts.

Despite losing the case, YouTuber Rea Gopane refuses to humble himself. It appears there will soon be more trouble brewing between him and Bonang Matheba because he is refusing to pay the reality TV star R300 000 as per the pair’s recent court judgement.

Earlier this week, Bonang shared that she won the defamation suit against Rea but it appears she will be required to fight a little harder since Rea has sworn not to pay.

ALSO READ: ‘I don’t have time for delusional women’: Rea Gopane on Bonang!

Zalebs reports that Rea has been taking to social media to make sure Bonang knows he does not plan on forking out the cash. In one tweet, Rea even says that he would rather burn his hard-earned cash than give it to South Africa’s Queen B.

“I would much rather burn every single Rand that I will ever make in my entire life than give it to that other queen of yours ???? literally set it on fire,” he wrote.

In a different video, Rea also makes sure people understand that he is completely against making the payment.

While some sided with Rea, others warned him of the implications of not paying Bonang the R300 000. Read some of their comments below:

“She’s trying to stay relevant and you just caught in the crossfire, it was gonna be someone else if not you.”

“You don’t need any enemies or witchcraft. You are your own worst enemy. Take the L and move on. Takes a real man to own up to his mistakes.”

Bonang has yet to respond to Rea’s social media posts.