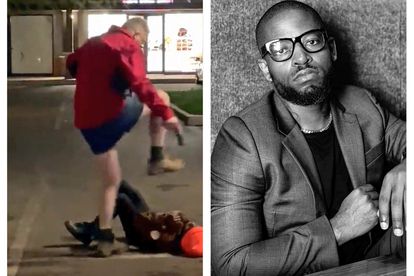 South African celebs – including Prince Kaybee – has reacted to a disturbing clip of an alleged racial attack in Gorblersdal, Limpopo.
Image via Twitter
@princekaybee_sa

South African celebs – including Prince Kaybee – has reacted to a disturbing clip of an alleged racial attack in Gorblersdal, Limpopo.
Image via Twitter
@princekaybee_sa

The disturbing clip of Kopano Makweng’s assault at the Globlersdal Game Centre on Wednesday night went viral in the early hours of Thursday whilst the country wok for Youth Day celebrations.

But there was little to celebrate for many following the brutal and unprovoked beating of the young boy.

According to broadcast journalist Cliff Shiko, the male appeared in the Groblersdal magistrates court on Friday morning. This, after he was arrested on Thursday on charges of assault with intent to cause grievous bodily harm and the unlawful pointing of a firearm.

Shiko tweeted that the bail application for the man had been postponed to Thursday 24 June. As a result, the yet-to-be unidentified man would be spending a week behind bars.

According to Limpopo police spokesperson Motlafela Mojapelo, the assault took place outside a local fish and chips outlet after an argument broke out when the boy reportedly asked the man to pass him the salt.

On Thursday, a crowd gathered outside the Groblersdal Game Centre where the incident took place.

Another clip of the man’s family members reportedly dropping off several blankets for him in the police holding cell has also gone viral. In the clip, two women are seemingly turned away from police after they attempted to give him blankets and a pillow.

The Groblersdal assault trended on Twitter with many users- including celebs – sharing their views.

@sivngesi “Make this piece of s**t famous. The boy is only 16

@Leratokganyago: “What in the actual f**k?”

@ntsikimazwai: “This was a racist attack… Call it by its name”

Here is tweeps from Groblersdal had to say about the attack: