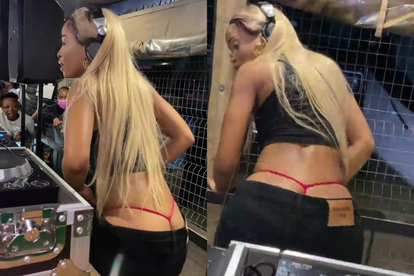 Uncle Waffles and her famous undies are once again disrupting timelines. Images via Twitter: @Ditabe_

Uncle Waffles and her famous undies are once again disrupting timelines. Images via Twitter: @Ditabe_

Uncle Waffles is trending again. And no it’s not because of her insane DJ skills. The young star has once again caught the attention of social media users who can’t help but discuss her underwear which is always on show. The DJ has been compared to Zodwa Wabantu after she once again performed while showing off her T-string.

Uncle Waffles breaks the internet with her sexy underwear

Uncle Waffles shot to stardom here in South Africa after a video of her showing off her DJ skills went viral. Since her debut, she has been making headlines – but not because of her insane talent.

After the hype around the beautiful young DJ died down, many people started to question whether or not she actually could work the decks. A lot of people accused her of taking advantage of the popular local song Adiwele.

“This is what I hate about this whole internet sensation thing, we overhype people and make them think that they are talented. Uncle Waffles has zero talent. She is a pretty girl but she is not talented. She can dance and she has a great stomach but we have a million other talented dancers.

“When the Adiwele song falls off will she be here? I don’t thinks so,” said the YouTuber.

And now she is trending again after she was spotted showing off her underwear. “Uncle waffles I love her so much ❤️ but is this appropriate way to dress as a DJ?,” Twitter user, @Ditabe_ asked.

“The reason why she is Uncle Waffles and not Dj Waffles????”

“It’s the only way she can remain relevant.”

Naturally, there were a number of people who quickly jumped to the DJ’s defense. Many of them called on people to stop policing the way she chooses to dress herself.