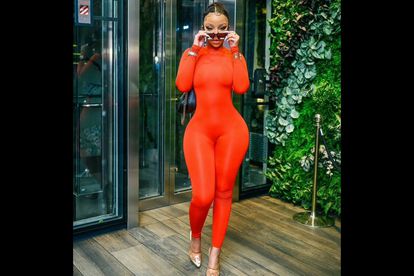 Faith Nketsi’s secret wedding last week left many people wondering out loud whether or not the reality TV star and influencer is pregnant. Some social media users even swore that the curvy IG model had a bit of a bump going on in her ballerina-style wedding dress.

Now she has come online to share that she is definitely not pregnant and not planning on having a baby anytime soon.

On 11 April this year, Faith Nketsi said I do to her long-term boyfriend KwaZulu-Natal businessman Nzuzo Njilo. The pair wed in a secret ceremony at a beautiful venue in De Deur, south of Johannesburg.

The seemingly impromptu wedding resulted in a number of rumours about the pair expecting a child.

In fact, shortly after the wedding, Zalebs reported that close friends of the Have Faith star confirmed that she was expecting a child and was keeping it under wraps – the same way she did with her beautiful wedding.

This appears to have been nothing but speculation after Faith took to her Instagram Stories to share a video of her very small waist and flat tummy.

In the clip, Faith says that she is not pregnant and wants everyone to stop the rumours. She also added that she is not planning on having a baby anytime soon, adding that she has gained a bit of weight but not that much.

The post which was reshared on Twitter received a number of reactions from her fans who seemed to be a little disappointed. One fan, @mackay_zee, however, asked people to mind their own business and wrote:

“Can y’all leave @_faith_nketsi in peace? if she says she’s not pregnant then she’s not….Please show some respect.”