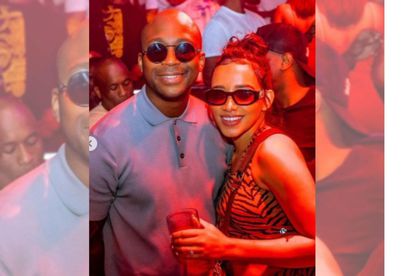 Actor and musician NaakMusiq has rubbished Musa Khawula’s claims that he is engaged to his girlfriend, Robyn Leigh.

This is after the entertainment reporter announced that the pair are engaged on Twitter.

Isono actor NaakMusiq has put cold water to Musa Khawula’s reports that he and Robyn Leigh are engaged to be married.

Musa Khawul reported that the musician proposed marriage to his doctor girlfriend, Robyn Leigh after she posted a diamond ring on her finger.

Naak revealed on Khawula’s post that the news is fake and stated that he is dating Leigh but they’re not engaged.

“Stop this, she didn’t reveal sh*t. Neither did she make any announcement, neither is it any of your business, to be honest.”

“She got that ring with her own money. Where she puts it is her choice. Stay in your lane. WTF!”

This was after he posted videos on Twitter on Friday evening claiming Bheki Cele was at Coco nightclub in Cape Town with his daughter Khumbuza Cele.

Tweeps jumped at the chance to criticise Cele with some stating that Cele is a hypocrite.

Cele has demanded Khawula to retract his statements and delete his tweets which have damaged his daughter’s reputation and his own.

Tweeps are refusing to believe Naak Musiq’s statements even after he denied popping the queen because of his Instagram posts with his girlfriends.

“He did not deny dating her, he denied being engaged to her.”

“This one never dated a black girl even on Generations.”

“This engagement thing it’s a waste of money and time and it’s for coward lovers.”

“How could you date someone for 2 years from there you engage them.?

“I didn’t think it was true when I heard about it.”

“The picture of that lady proves it. So he is into vanilla and caramel.”