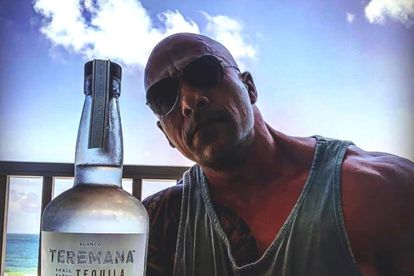 Dwayne Johnson, aka The Rock, has stumbled upon his “long-lost twin”…and let’s just say he’s lost for words by the uncanny resemblance!

The WWE fighter-turned-actor tweeted his sheer surprise after discovering the pic of an Alabama policeman who recently went viral.

The Rock replied to a tweet tagging him about his “twin” Eric Fields, who has the internet doing a double-take over his near-famous looks.

He tweeted: “Oh sh***! Wow. Guy on the left is way cooler. Stay safe brother and thank you for your service”.

Also read: Double-take: This cop could pass for The Rock’s twin [photos]

The Fast & Furious actor also expressed his desire to meet the serviceman – and down tequila shots!

“One day we’ll drink @Teremana  and I need to hear all your “Rock stories” because I KNOW you got ‘em”, he added.

And Eric – who serves as a Morgan County Lieutenant – gladly accepted the offer. “Thanks brother & cheers”, he responded.

Like The Rock, tweeps were amazed by the pair’s likeness.

One tweep exclaimed: “But seriously did you guys do ancestry dna just in case? Cause that would be pretty funny if you were really long lost cousins or something.”

Another tweeted: “Damn! Legit looked at the officer thinking it was The Rock in costume for a movie!”

Meanwhile, a US woman by the name of Ashley has found fame online after fans likened her to rapper Cardi B.

The New York resident went viral after her hairstylist uploaded a video of herself installing a wig on the woman.

♬ Up (Instrumental) – Cardi B

But Ashley claims she just “doesn’t see” the comparisons.

She told Allure magazine: ““Everywhere I go, [I hear] ‘she looks like Cardi B.’ They’ll say it under their breath, and I’ll hear it…I literally try to look every time somebody says it, but I don’t see it.”

“I’ve never seen someone look SO MUCH like someone else and not be related to them…. Wtf”, posted one fan of the star.