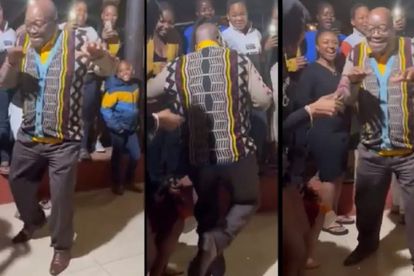 ‘uZuma Yi Star’: Former president Jacob Zuma danced for joy over the weekend at his Nkandla homestead, in KwaZulu-Natal, to celebrate the expiry on Friday 7 October of his prison sentence for contempt of court. Images via Twitter screengrabs @DZumaSambudla

‘uZuma Yi Star’: Former president Jacob Zuma danced for joy over the weekend at his Nkandla homestead, in KwaZulu-Natal, to celebrate the expiry on Friday 7 October of his prison sentence for contempt of court. Images via Twitter screengrabs @DZumaSambudla

Former president Jacob Zuma rising from his sickbed and dancing like a young man, does not exactly come as a surprise. Let’s be blunt here: We all suspected he was pulling a “sickie” to wangle an out-of-jail card so he could take hot showers and suffer in comfort at Nkandla. Pity the justice system let this one slide…

A video clip featuring an energetic JZ popping bottles of bubbly, enjoying a fireworks display and dancing with his family at his Nkandla homestead over the weekend, has gone viral. Needless to say, we are all in awe and disbelief at his display of robust health.

ALSO READ: WATCH: Zuma ‘thanks’ July Unrest rioters for fighting for him

Party like a medical parolee: Watch Zuma’s dance for joy

One tweep aptly captioned the video of Zuma grooving away over the weekend as follows:

“It’s lit there by Nkandla”.

The “lit” occasion — of which his darling daughter Duduzile Sambudla-Zuma shared videos far and wide — was in celebration of the expiry on Friday 7 October of Zuma’s prison sentence for contempt of court.

According to SowetanLIVE, the former corruption-accused president said he felt the same way he felt in 1973 after being released from Robben Island.

“It is a day of mixed emotions. I am relieved to be free again to walk around and do whatever I want to do without restrictions and having to seek permission, in the same manner that I felt in 1973 when I was released from Robben Island.

“Only this time, I am also filled with sadness. It was the first time ever that the Constitutional Court sentenced any person to a term of imprisonment and without even the benefit of a trial. I never expected this to happen during the freedom and democracy we fought so hard to attain,” he said in a statement posted on Twitter.

The former president was sentenced by the Constitutional Court to 15 months in jail for defying an instruction in February to give evidence at the Zondo Commission of Inquiry into state capture and allegations of high-level corruption during his time in office.

Zuma denies all wrongdoing and alleges that Deputy Chief Justice Raymond Zondo was biased against him.

Come to think of it: His high-energy performance mirrors the healthy dose of song and dance he delivered just before he was whisked off to Estcourt Prison on 29 June this year.

The 79-year-old’s mysterious medical condition only surfaced once he was handed his orange jumpsuit and other prison paraphernalia. It’s hard to believe that the ice-cold showers or a drafty cell could have been the cause for this very sudden bout of ill health.

ALSO READ: Zuma prison photos: ‘Known broadcaster’ may be behind the leak

Pulling a Schabir Shaik? Zuma and his ‘terminally ill’ bestie

Chances are that it was “inspired” by the medical parole granted to one of Zuma’s besties, Schabir Shaik, from the hey day of state capture and rife corruption during his time in office.

Almost 15 years ago, on 2 June 2005, the Durban businessman was convicted of two counts of corruption and one of fraud, according to IOL. The trial, in the Durban High Court, focused on the mutually beneficial financial relationship between Shaik and Zuma.

Judge Hilary Squires, who presided over the trial, sentenced Shaik to two terms of 15 years for corruption and one term of three years for fraud. Shaik was ultimately given a 15-year sentence and reported to jail in 2006.

ALSO READ: Who is Schabir Shaik, and what is his link to Jacob Zuma?

The many perks of medical parole…

Barely two years and four months later, Shaik was granted medical parole on the grounds that he was terminally ill, clinically depressed‚ losing his eyesight‚ had suffered a stroke‚ and would die from “severe” high blood pressure.

Despite being under house arrest, Shaik was frequently spotted shopping up a storm‚ dining at fancy restaurants, and getting into the swing of things on the golf course.

Some publications such as 2Oceansvibe called it a “medical miracle that he’s still chugging along“, although his doctor insists the right call was made back in 2009.

No doubt these two “medical miracles” will be taking it easy, sunning themselves at the former president’s fire pool…