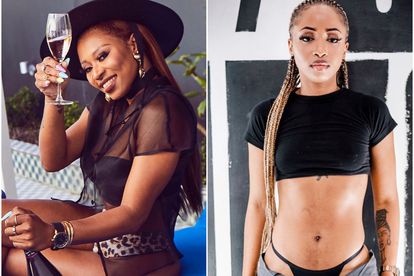 DJ Zinhle is coming to the defence of Uncle Waffles again, after the latter attracted backlash over her wardrobe.

Zinhle – hailed Africa’s Top Female DJ – had the back of her younger industry colleague who courted controversy for showing off her G-string during her performance on the deck.

But according to DJ Zinhle, it’s “her body, her rules”.

Responding to one tweep who questioned the vibrant entertainer’s “G-string game”, the mom-of-two responded: “It’s on her body, so it’s okay. She hasn’t asked anyone else to wear it. If you don’t like it that’s also okay but let’s learn to let people be”.

She also slammed criticism that Uncle Waffle’s dress code affected her performance in any way.

She tweeted: “Her outfit changes the sound/music yini?[ How?] Nisho phela [Because you say so] So you haven’t paid for any of her shows but you have so much to say. Ay niyanyisana nina [ you are insulting one another]”.

Zinhle – who was also named Forbes Africa’s Female Entertainer of the Year – also clapped back at a tweep who claimed Uncle Waffles was “ruining the reputation” of other female DJs.

She added: “The industry’s growing and we can’t all do it the same way”.

Meanwhile a “prayer” posted by Waffles prior to her gaining overnight fame has gone viral.

The 21-year-old entertainer shared her personal notes on her IG Story in which she “manifested” a successful future.

In the prayer, the star asked God for “new opportunities”, “more money” and a “new phone – preferably an iPhone 12 Pro Max”.