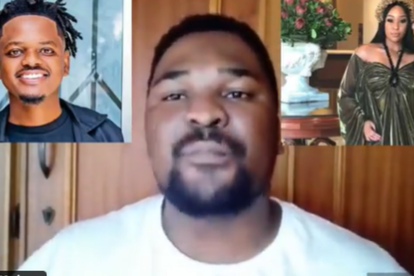 Slik Talk says Minnie Dlamini is not really talented and should not be bashing MacG. Image via YouTube: @SlikTalk

Slik Talk says Minnie Dlamini is not really talented and should not be bashing MacG. Image via YouTube: @SlikTalk

Slik Talk has seemingly found his next target and it’s none other than media personality Minnie Dlamini-Jones. The controversial YouTuber took aim at Minnie after she criticised MacG’s Podcast and Chill following his viral Jub Jub interview.

According to Slik Talk, the actress and presenter has no real talent and is relying on her looks to get by.

Slik Talk to Minnie Dlamini: ‘MacG’s podcast is growing, your looks are fading’

Minnie Dlamini just found herself on Slik Talk’s list of South African women to bash after she slammed MacG’s famous podcast show. The Soccer Zone presenter took to Twitter to slam MacG shortly after his interview with Jub Jub went viral and opened a can of worms.

“The MacG and Jub Jub podcast is the most degrading piece of content I wish I never consumed. I couldn’t even finish it! You guys should be ashamed of yourselves. Women can’t be spoken about like this and it’s condoned?! Do better!!!,” wrote Minnie in her tweet.

This did not sit well with celebrity basher Slik Talk who grilled Minnie so hard she quickly trended on Twitter for a bit. According to him, Minnie has no real talent and especially lacks when it comes to sports presenting.

Slik Talk also said that once her looks fade she’ll pretty much be a nobody while MacG’s show continues to pull numbers.

“The podcast is growing weekly, & your looks are fading daily.”

“So, let us see who is who in 10 yrs, let’s see who’s gonna last the long run,” says Slik Talk in his latest clip.

Many people agreed that Minnie is not the best fit for sports TV. One person even referred to the young YouTuber as “the voice of truth.” Others however slammed him as a women hater while laughing at his arguably shrill voice.

“What a pleasant voice u have, the voice of truth…”