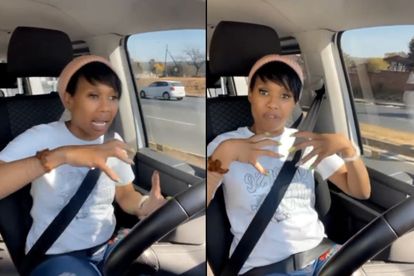 Tweeps have slammed for Dineo Ranaka for recording a video and failing to keep her hands on the steering wheel while in the driver’s seat. Image via Twitter @MusaKhawula

Tweeps have slammed for Dineo Ranaka for recording a video and failing to keep her hands on the steering wheel while in the driver’s seat. Image via Twitter @MusaKhawula

As per the South African National Road Traffic Act, there are strict rules about using your cellphone while driving. Arrive Alive reports that local drivers may not take photos, browse the internet or use social media while driving.

Metro FM radio presenter and reality television star Dineo Ranaka has come under fire after she recorded a 55-second video of herself “ranting’ while behind the wheel. Tweeps have slammed Ranaka for risking her own life and the lives of others.

In a video reposted by controversial blogger Musa Khawula on Monday 13 June, Dineo Ranaka sent a message to popular cider brand Savanna “on behalf” of those who enjoy the beverage.

The 38-year-old said she was not pleased with the brand’s new flavours adding that they should send the flavours to “other countries” and “leave us” with Savanna Dry.

While filming the video, Rana has her hands off the steering wheel multiple times and takes her eyes off the road to deliver her “message”.

Reacting to the video, tweeps were not too pleased with Dineo Ranaka recording the video while driving. Some tweeps pointed out that the radio presenter’s vehicle appeared to have been moving at a fast speed.

“Risking your life and the lives of others to relay a whack-ass message about a cider that nobody asked for is crazy,” wrote one tweep.

“This is so reckless bathong. Can’t she park and do this?” wrote another tweep.

“What she is doing is a traffic offence by the way Fikile Mbalula – but we know y’all are very busy doing other things you won’t call this behaviour out.”

WHAT THE LAW SAYS

According to the South African National Road Traffic Act, no one may drive while holding a cellphone in one hand, both hands or with any other part of their body.

This rule does not apply to drivers of fire-fighting vehicles, drivers of rescue vehicles, ambulances or traffic officers.

Take a look at all the rules of the road here