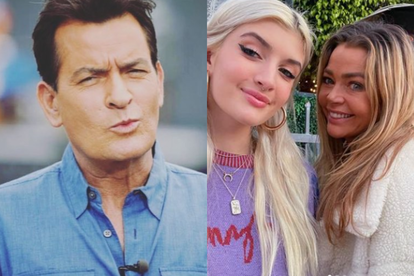 Charlie Sheen does not condone his daughter’s use of OnlyFans. Images via Instagram: @charliesheen/@samisheen

Charlie Sheen does not condone his daughter’s use of OnlyFans. Images via Instagram: @charliesheen/@samisheen

United States actor Charlie Sheen is reportedly not happy that his 18-year-old daughter Sami Sheen has joined adult content site OnlyFans. The Two and a Half Men star says that he does not condone her use of the platform and thinks that her mother, actress, and model Denise Richards may have something to do with it.

Sami joined the platform while living with her mother.

56-year-old Charlie Sheen says that he does not condone his eldest daughter Sam “Sami” Sheen’s use of the online content platform OnlyFans.

Taking to her Instagram, Sami announced that she was joining the subscription-based media platform that is generally used to share content of a sexual nature at a premium price.

“Click the link in my bio if u wanna see more ????,” she captioned a snap of herself in a sultry swimsuit.

Meanwhile, dad is not impressed but appears to have accepted his daughter’s decision. Speaking to Page Six, he hinted that Sami joining the app may have something to do with her living with her mother Denise.

“She is 18 years old now and living with her mother. This did not occur under my roof.”

He adds, “I do not condone this, but since I’m unable to prevent it, I urged her to keep it classy, creative, and not sacrifice her integrity.”

Sami turned 18 in March this year and urged her followers to subscribe to her OnlyFans if they want more exclusive content. She also promised to upload new content two to three times a week.

“Sami is 18, and this decision wasn’t based on whose house she lives in. All I can do as a parent is guide her and trust her judgment, but she makes her own choices.”

She also commented on her daughter’s post that she loves her and will always support her.