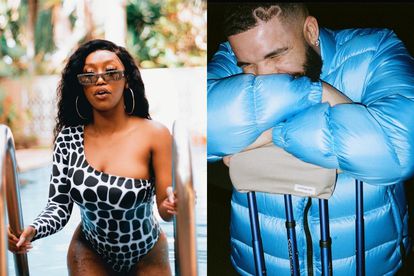 Rumour has it Drake is crushing on Kamo Mphela. Images via Instagram @kamo_mphelaxx @champagnepapi.

Rumour has it Drake is crushing on Kamo Mphela. Images via Instagram @kamo_mphelaxx @champagnepapi.

South African dancer Kamo Mphela seems to have responded to the rumours that Canadian rapper Drake is crushing on her via a tweet today (7 September).

WHERE DID THE RUMOURS START?

The rumours of Drake crushing on Kamo Mphela started when South African rapper Cassper Nyovest said in an interview on the Banques and Venom show on 10 August that Kamo Mphela is underrated as she does not know international artists Drake and Tory Lanez are lusting over her.

“I was even talking to Kamo Mphela the other day and I said, ‘You sleeping on yourself, do you know who you are?’ I’m like, ‘Do you know that Drake and Tory Lanez talk to each other and say ‘I wanna f*** this girl?,” said Nyovest.

“Like I’m telling you.’ Right now the American rappers are probably looking at Kamo Mphela and are like ‘yooohh’,” he continued.

Cassper’s comments led to many believing Drake is crushing on Kamo Mphela. The dancer took to Twitter in what seems to be a response to the rumours, saying that she needs to check with Drake because “wow”…

Tweeps reckon Drake is out of Kamo’s league

Tweeps were not kind in the comments section as they implied that Drake was out of her league.

“One good performance in London centre and she wants to talk to Drake,” wrote @MatidzaThaps when translated to English.

Kamo Mphela posted a video of her electric performance in London which racked up over 295 000 views.

She thereafter trended on Twitter as Mzansi was so proud of her for performing internationally and taking amapiano to the world.

Celebrities, such as social media star Lasizwe Dambuza and DJ Zinhle, gushed over the dancer’s performance in the comments section of the post.

She has since posted an Instagram Reel of what seems to be her latest performance. Watch the video below.

However, some Tweeps this week also thought that this was the life that they wanted for Gqom Queen Babes Wodumo, but her husband, Mampintsha, “ruined it for her”.