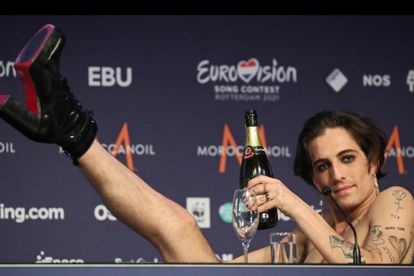 The lead singer of the Italian rock band, Måneskin – who won the Eurovision Song Contest on Saturday 22 May – said that he will take a voluntary drug test in order to prove that he did not snort cocaine during the show.

According to AFP, Måneskin’s vocalist, Damiano David will be tested after going back to Italy, following viral footage of him leaning over a table in the hospitality area of the competition in Rotterdam.

“We are aware of the speculation surrounding the video clip of the Italian winners of the Eurovision Song Contest in the Green Room last night,” the European Broadcasting Union (EBU) said in a statement. “The band have strongly refuted the allegations of drug use and the singer in question will take a voluntary drug test after arriving home. This was requested by them last night but could not be immediately organised by the EBU.”

Early on Sunday 23 May, the singer was asked about the footage during the winners’ press conference and said he had been looking down because guitarist Thomas Raggi had broken a glass.

From the streets of Rome

Meanwhile, the band later said on their Instagram stories that they were “ready to get tested because we have nothing to hide”.

“We are really shocked about what some people are saying about Damiano doing drugs. We really are AGAINST drugs and we never used cocaine,” the band – who started out as buskers on Rome’s main shopping strip – said.

The EBU also later confirmed that evidence at the scene backed up David’s account about the glass smashing.

Evidence at the scene

“The band, their management and head of delegation have informed us that no drugs were present in the Green Room and explained that a glass was broken at their table and it was being cleared by the singer,” its statement said.

“The EBU can confirm broken glass was found after an on site check. We are still looking at footage carefully and will update with further information in due course.”

Måneskin, Danish for “moonlight” and a tribute to bass player Victoria De Angelis’ Danish ancestry, won with a total of 529 points at this year’s Eurovision Song Contest. France was second while Switzerland, which led after national juries had voted, finished third.