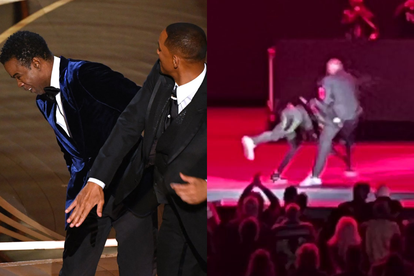 Chris Rock turned Dave Chappelle’s on-stage attack into a joke about his Will Smith slap on Tuesday evening. Image via Twitter: @jjfThompson

Chris Rock turned Dave Chappelle’s on-stage attack into a joke about his Will Smith slap on Tuesday evening. Image via Twitter: @jjfThompson

US comedian Chris Rock is evidently healed and ready to joke about the infamous slap veteran actor Will Smith gave him on stage at the Oscars 2022 awards ceremony about month ago. Rock took a swipe at the Pursuit of Happyness star after Dave Chappelle was attacked by someone in the crowd at his live comedy event on Tuesday evening 3 May.

Needless to say, many people haven’t stopped chuckling at Rock’s joke while sharing their thoughts on the Chappelle incident.

On Tuesday night, controversial US comedian Dave Chappelle was attacked by a 23-year-old man, Isaiah Lee, wielding a fake gun during his Netflix Is a Joke festival.

The incident, which happened at the Hollywood Bowl, sparked a surprising joke by Chappelle’s friend Chris Rock, 48, who took the opportunity to take a swipe at Will Smith and the infamous Oscars slap that came as a result of Rock’s joke about Jada’s Pinkett-Smith’s bald head  caused by the medical condition alopecia.

“Was that Will Smith?” Rock took to the stage and asked, much to the amusement of the crowd.

ALSO READ: Battle of the hosts: Oprah and Ellen fighting to get Chris Rock in their seats

The joke has also come as a surprise to many because Rock – who many people sided with after the shocking incident – had not spoken out about the slap formally and was expected to sit down for a high-profile interview in the near future.

It has also gone viral on TikTok as millions of people commented on how “wild” the incident was.

“Dave Chappelle got tackled to the ground on stage! Then a Chris Rock came out and said, ‘was it Will Smith!’ The wildest s**t, I have ever seen,” one person wrote.

Meanwhile, Chappelle escaped from the incident unharmed while his attacker, who had placed a real knife inside the replica handgun, was arrested and charged with felony assault with a deadly weapon.

Chappelle is also facing huge social media backlash for joking that it was a “trans man” who attacked him.