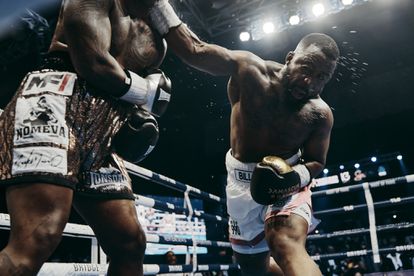 Cassper Nyovest has responded to a Twitter fan who asked him if his match against Naakmusiq was rigged by betting agents Hollywoodbets.
Image via Twitter
@casspernyovest

Cassper Nyovest has responded to a Twitter fan who asked him if his match against Naakmusiq was rigged by betting agents Hollywoodbets.
Image via Twitter
@casspernyovest

Cassper Nyovest is struggling to come to terms with his defeat by his celebrity boxing match opponent Naakmusiq …and tweeps are suspecting foul play.

The rapper lost the highly anticipated match against his rap rival on Saturday night in an event called “Celeb City”.

But a number of tweeps are convinced that the match was rigged after Naakmusiq – who has “never boxed a day in his life” prior to the fight – was named the winner though majority votes made by Boxing SA judges.

DID HOLLYWOODBETS RIG THE MATCH?

Following the match, Twitter was alight with many conspiracy theories.

Many tweeps claimed it made “good business” sense to Cassper and betting agents Hollywoodbets to rig the match in favour of Naakmusiq. This, after Cass, claimed that he landed more “clean shots” than his opponent.

“By the look of things, Cassper won that match. But Hollywoodbets knew that a lot of you would bet your money on Cassper. At the last hour, they decided to give it to Naak Musiq because they didn’t want to lose more money”

“Betway and Hollywoodbets tipped them that if Cassper loses there will be lot of money. This fight was rigged”

“Hollywoodbets just minimized their losses by taking all the bets Cassper had and handed the win to Naak so they pay out less. Business wise it’s still a win for Cass and the sport”

ALSO READ: Naakmusiq throws shade at Cassper after fight: ‘The beauty of silence’

After catching wind of the tweets, Casper responded to one tweep, posting: “Everyone has their opinion and I can’t comment on that. All I can say is that I am [going to] get back in the gym and work on my plan for the rematch. I’m definitely not going to leave it in the hands of the judges again”.

Meanwhile, Cassper did his best to console fans who had lost large sums of money after betting against him via Hollywoodbets.

The hitmaker assured tweeps that his rematch with Naak would yield a victory for him.