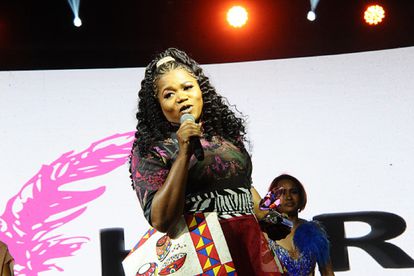 According to IOL, in an advert, Fenty Beauty owner Rihanna is seen showcasing their newest release, Eaze Drop Blurring Skin Tint, which comes in 25 shades. It wasn’t long after when the music used in the video caught the attention of South African social media users at it has a striking similarity to Midnight Starring produced by DJ Maphorisa, DJ Tira, Rude Boyz, Distruction Boyz and features Busisiwa and Moonchild Sanelly.

Busiswa on Rihanna using a remake of her song

Busiswa later responded to Twitter user @Fentselite_ after tagging her in a post with the video assuming that it was a sample of Midnight Starring that was used.

The star responded to the post and said: “Nah. @fentybeauty just used a REMAKE of Midnight Starring with my voice, to avoid paying us for it. I’m sad but it’s the game I guess.”

Many took to Twitter in defence of Busiswa saying that “everyone that worked on this record is supposed to get their monies because all I hear is Mid-night starring here”.

Others blatantly said Rihanna and the Fenty team are “thieves”.

Last year it was reported that the plagiarised track – called Culture – featured Will.i.am alongside Megan Ryte and A$AP Ferg. Back then, the collective was accused of stealing content from the South African artist DJ Lag. The online community said at the time that DJ Lag’s Ice Drop, released way before the new collaboration came out, is a proud product of SA’s unique musical stylings.

“My team at Black Major and their management team got in touch very quickly to discuss solutions. Communication was fast and I think this had something to do with all the pressure on social media,” DJ Lag said.