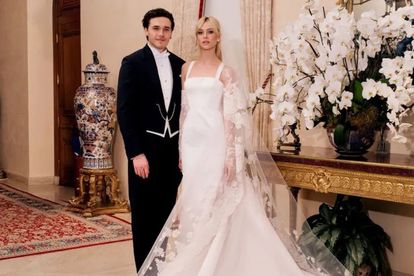 Close friends of the Beckham and Peltz families gathered in Palm Beach, Florida to celebrate the marriage of Brooklyn Beckham and Nicola Peltz on Saturday 9 April. The wedding was held at a mansion owned by Nicola’s father, billionaire Nelson Peltz, at his exclusive estate. It is reported by the Daily Mail, that Peltz paid a whopping £15 million (R286 million).

According to US Magazine, Brooklyn Beckham and Nicola Peltz began dating in October 2019 and made their relationship “Instagram official” in January 2020. Beckham proposed to the 27-year-old actress in July of the same year.

In an interview on British television show Lorraine in 2020, Victoria Beckham said Peltz was “just wonderful”.

“She’s sweet, she’s kind, she’s such a lovely warm, wonderful, wonderful woman. We couldn’t have asked for Brooklyn to meet a more adorable, lovely lady. We are very happy. We love her. He’s so happy,” said Victoria.

Nicola wore a gorgeous Valentino wedding gown with custom details like a personal message from the Valentino team and an evil eye as a talisman from her mother, former fashion model, Claudia Heffner Peltz.

Brooklyn wore a custom Dior tuxedo and accessories with diamond chains designed by Los Angeles-based jeweler, Ania Ko. The chains were gifted to him by his new in-laws.

The couple had two wedding ceremonies, a Jewish and a Catholic ceremony. According to The Daily Mail, the rabbi who conducted the Jewish ceremony accidentally called Brooklyn, David. The rabbi apologised mentioning that he is a football fan.

A source told People Magazine that American illusionist, David Blaine, performed some magic tricks for the guests during the cocktail hour and Grammy award-winning singer Marc Anthony performed on a rotating stage. South African singer Lloyiso performed a rendition of Only Fools Rush In.

The source also revealed that Brooklyn’s father, David Beckham, gave a moving speech during the reception. The legendary soccer player spoke about the Beckham’s family life and praised his wife Victoria for being a great mother to their four children, Brooklyn, Romeo, Cruz and Harper.