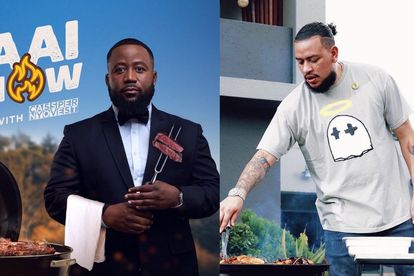 Cassper Nyovest and AKA Images via Twitter @casspernyovest @akaworldwide

Cassper Nyovest and AKA Images via Twitter @casspernyovest @akaworldwide

Platinum-selling rapper Cassper Nyovest announced his exciting television gig to fans yesterday. After weeks of teasing a television venture on social media, he finally revealed that he would be taking over AKA’s role as the host of The Braai Show.

CASSPER BOOTS AKA AS HEAD CHEF ON ‘THE BRAAI SHOW’

Cassper’s announcement yesterday took tweeps aback because everyone was sure AKA was still the host of the show.

Entertainment commentator Phil Mphela confirmed that AKA still owned a 50% share of the show, with tweeps claiming Cassper would now be working for his rival.

‘AKA PLAYS NO ROLE IN SEASON TWO’

In a statement sent to IOL, Cake Media and MakhuduCom cleared the issue of AKA owning a 50% share of the show.

In a joint statement, the two companies revealed that they are the sole owners of The Braai Show and rapper AKA plays no role in season two of the show.

“As a business, the executive producers have a duty to deliver maximum value for viewers, broadcasters and advertisers. To this end, it is their mandate and prerogative to secure the most appropriate talent, evolve the show, secure funding and deliver a compelling product to audiences”

Although the statement did not reveal why AKA was no longer the host of The Braai Show, the issue was broadly addressed, mentioning that due to various reasons it had to pivot the show and take on a new host to ensure its success for the future.

WHAT TO EXPECT FROM SEASON TWO OF ‘THE BRAAI SHOW’

Cake Media and MakuduCom shared that viewers would certainly enjoy what’s in store for season two of The Braai Show.

Viewers will experience a different side to Cassper Nyovest, as he hosts different guests every week diving into burning conversations about life, music and what’s on the braai.

Cassper shared that he wants to give viewers a taste of how it feels to be him.

“I want to explore this even further on The Braai Show with Cassper Nyovest.”

“Not only will I try and get guests to reveal things people didn’t know about them, but I also want to show my fans a different side to my public persona.

“And, while I may not be a braai master, I’m pretty handy cooking on the coals.”