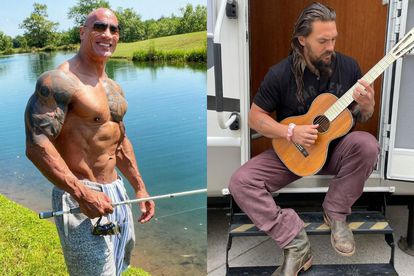 Aquaman star Jason Momoa and fellow actor Dwayne “The Rock” Johnson have confirmed that they do in fact shower daily, following the “no shower hour” trend that hit Hollywood recently.

That 70’s Show stars Ashton Kutcher and Mila Kunis sent shock waves across the globe when they revealed they only bathe their kids when visibly dirty in an interview with Dax Shepard and Monica Padman’s podcast, Armchair Expert on 19 July.

The stars also confessed they each don’t shower daily. Mila Kunis said she did not have hot water growing up so she didn’t shower much anyway while Ashton Kutcher said he only washes his armpits and crotch area and “nothing else ever”.

Fellow actress Kirsten Bell and her husband Dax Shepard then followed saying they only bathe their kids when they get the “stink”, in an interview on The View, on 3 August.

AQUAMAN AND THE ROCK SHOWER DAILY

While most people were shocked by these revelations both Jason Mamoa and Dwanye Johnson confirmed that they each shower daily.

“I’m not starting any trends. I shower, trust me,” said Momoa to Access Hollywood.

While The Rock confirmed that he in fact showers three times a day in a tweet. Here is The Rock’s shower routine.

EXPERTS WEIGH IN ON DAILY SHOWERS

Several experts say that not showering everyday can lead to chronic skin conditions and body odour.

“One thing most people are aware of is the stench of body odour caused by sweat and bacteria when left too long without showering which is a feature that can and most likely will occur if you work out and don’t shower every day,” said Dr Emeka according to Daily Mail.

Experts also warned that dodging a daily shower leads to skin irritability as well as skin infections and warts.

“If you don’t bathe frequently, the skin can become oily and could get infected with bacterias and even fungus. On some occasions, dirty skin could even cause warts,” said Dr Kathy Taghipour according to Daily Mail.