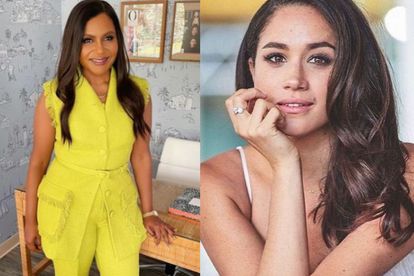 Duchess of Sussex Meghan Markle announced that American actress and producer Minday Kaling will be the guest on the third episode of her podcast Archetypes which releases on Tuesday 6 September. So, here’s five things to know about the actress.

Meghan Markle debuted her Archetypes podcast on 23 August on Spotify with Serena Williams as her first guest. She then had iconic pop artist Mariah Carey on the second episode. Now, she will be joined by Mindy Kaling.

So, what do we know about Mindy?

1. SHE STARRED IN ‘THE OFFICE’

Mindy starred in The Office as Kelly Kapoor, a customer service representative at the Scranton branch of Dunder Mifflin. She starred in seasons one to eight and she also served as a writer, director and producer of the show.

The Office star’s middle name is Mindy but her full name is actually Vera Mindy Chokalingam. She got her middle name from the character of the 1970s comedy Mork & Mindy.

Her mom used to watch episodes of the show while she was pregnant in Nigeria. She shortened “chokalingam” to get the surname Kaling.

The 43-year-old graduated from Dartmouth College in 2001, which is an Ivy League school. She got her degree in Playwriting according to TV Over Mind.

4. SHE CREATED NETFLIX’S ‘NEVER HAVE I EVER’

Mindy is the creator of Netflix’s hit series Never Have I Ever. The series stars is an American coming-of-age comedy series which stars Maitreyi Ramakrishnan, who plays an Indian-American teenager.

Mindy dated her The Office co-star B.J Novak, who played Ryan her love interest on the show. The pair were in an on-and-off relationship from 2004 and 2007.

The star has two children – Katherine and Spencer. She has not revealed the paternity of her kids. She refers to herself as a single parent.

“I want them to be old enough to talk to me about it. I’m the only parent my kids have. I think I err on the side of super cautious so that there’s less things they can potentially be mad at me about down the line,” she said to Marie Claire.