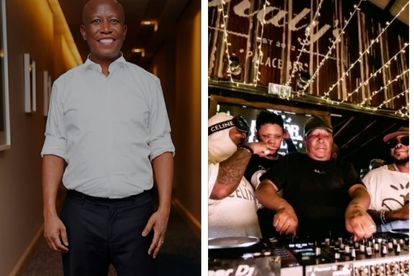 EFF leader Julius Malema had the crowd at his feet, chanting his name during his amapiano set with Major League DJz. Image via Twitter @love_k, @julius.malema.sello/Instagram

EFF leader Julius Malema had the crowd at his feet, chanting his name during his amapiano set with Major League DJz. Image via Twitter @love_k, @julius.malema.sello/Instagram

Some call him Julius Malema, others call him the Commander in Chief (CIC), but when he puts on his headphones and move in behind the decks, he is DJ Juju!

The Economic Freedom Fighters (EFF) leader has made a name for himself on the music scene and followers are loving it. At the weekend, he was rubbing shoulders with Major League DJz during a live Balcony Mix Xperience showcase at Katy’s Palace, in Johannesburg.

According to IOL, Malema joined the Major League DJz twins as they set a new 75-hour DJing record over a three-day event. In 2010, Black Coffee attained the Guinness World Record for the longest-ever DJ set when he played for 60 hours nonstop.

When Malema hit the stage just after midnight, he played his set for just under an hour. A video of the EFF leader enjoying the party life as the crowd chants “dlala Malema” was shared on social media.

During the politician’s set, Focalistic, who recently won the award for Best Southern African Artiste Of The Year at the 15th annual The Headies Awards, joined him on stage to perform his song Sjepa.

DJ JUJU TO THE WORLD

Malema does not only make the crowd in South Africa go wild with his amapiano mixes.

In July this year, he visited Ibiza – the party capital of Europe — where he played for guests attending the wedding of South African businessman Adriano Mazzotti’s daughter.

Following his trip to Spain, Malema appeared on Podcast and Chill with MacG and Sol Phenduka where he applauded the amapiano music genre for “alleviating poverty”, something he claims the government is failing to do.

“Amapiano has fought poverty big time and has changed the lives of people in a big way, and then you ask yourself: ‘What is the state’s role? What role did the state play?’ Nothing.

“Instead of opening studios in every municipality where people could book for an hour to go and record without paying anything to harness and support [talent].”