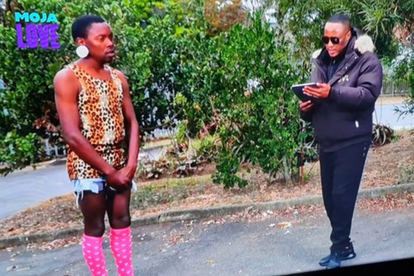 As usual, fans were left wanting more from Jub Jub after watching Sunday night’s episode of Uyajola 9/9. This time people watched with shock as one man confronted his cheating partner who found love in another man’s arms.

The drama was so hectic that many South Africans wondered out loud whether or not the entire thing was staged.

On Sunday 13 September thousands of people tuned in to watch another action-packed episode of Uyajola 9/9. Seeing how almost every episode unpacks a plethora of drama, it’s no wonder Jub Jub is once again trending on Twitter as people share their thoughts on the latest couple to have their personal relations opened up for the public to see.

This time many folks glued themselves in front of their TVs as one man asked Jub Jub to help him find out whether or not his boyfriend was being unfaithful.

From the get-go, people were intrigued by the guy in question who was wearing bright pink knee-high socks and a leopard print vest. They became even more intrigued after he described how he sold fruit and vegetables in order to financially support his partner.

As he does, Jub Jub caught the cheater in action resulting in one of many physical altercations that the security always finds themselves breaking up.

South Africans wasted no time taking to Twitter where they shared what they thought about the poor guy’s situation. Many of them also laughed at how Jub Jub seemingly always finds ways to aggravate the situation with his cheeky responses. A lot of tweeps also wondered whether the show was staged.

“In every episode, there comes a point where Jub Jub always looks defeated.”

“#Uyajola99 even Jub Jub can’t handle this much Drama”