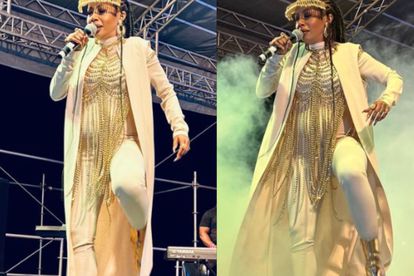 South African singer Kelly Khumalo topped the Twitter trends list on Monday 5 December, after a picture of her performing sparked speculation that she may be pregnant.

KELLY KHUMALO IS RUMOURED TO BE PREGNANT

Singer Kelly Khumalo posted photos of herself performing on Monday 5 December where she appeared to have a baby bump according to fans. Take a look…

“She has been dating her footballer for some time now. But I don’t know If they are still seeing each other because we have not spoken for a while because she has been very moody. Our friendship has been on and off but I know we will be okay soon. Well, as soon as she gives birth, I know things will be okay,” said the source.

Twitter users said that the father of the singer’s baby is “brave”. Take a look…

“The bravest man is he who impregnated Kelly Khumalo,” wrote @dme_363.

“That man who got Kelly Khumalo pregnant deserves a medal for bravery,” wrote @ChrisExcel102.

While other Tweeps have defended the singer.

“Kelly Khumalo’s pregnancy shows that no matter how much u think you’re unlovable and at the basement, someone will always be there for u to pick your hand. It’s even more beautiful that her career is peaking, and the glow? She looks so amazing,” wrote @Melo_Malebo.