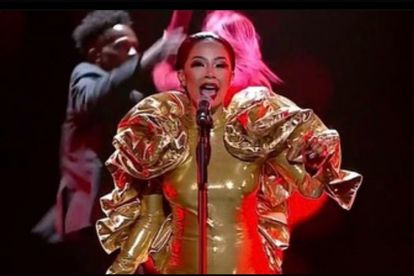 Kelly Khumalo was dubbed the “fan favourite” to replace media personality Somizi Mhlongo as a judge on Idols SA following the abuse allegations made against him.

Therefore, fans were calling for Kelly to take Somizi’s seat since he had been put on “time off”. However, it was reported that the singer would not join Idols SA because it would be a conflict of interest as she was already attached to competition show Stand Up SA on SABC 2.

However, the Empini hitmaker surprised fans with an appearance on the show on Sunday 31 October.  Although her seat on the judging panel was much anticipated, Tweeps thought her judging skills fell flat.

TWEEPS: ‘KELLY KHUMALO WAS BEYOND HORRIBLE’

Tweeps thought that Kelly did not have an opinion of her own but instead just went with whatever judges Randal Abrahams and Unathi Nkayi said.

“And just to balance a kak night of Idols out, Kelly Khumalo was beyond horrible. It was like she (would) just go with whatever Randal and Unathi said. If they said bad she said bad if they said good she said good. Useless. The last person that was so bad was Zahara. #IdolsSA,” wrote a Tweep.

Tweeps did not seem to like the singer’s criticism towards Berry.

“Berry she’s the only singer ???? who sings, nice the rest are awful but #idols #IdolSA judges were (biased) as usual, especially Kelly Khumalo. Please people of Mzansi Flag of South Africa vote for Berry so that she can win this year’s @IdolsSA,” wrote a Tweep.

While others defended the singer.