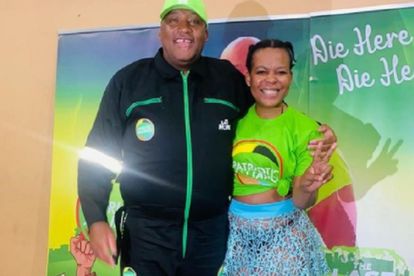 Zodwa Wabantu is used to giving fans an eyeful to look at during her stage performances, and her recent show at an election rally was no different.

The entertainer made her foray into politics by publicly endorsing the Patriotic Alliance last week, helmed by convicted criminal-turned-businessman Gayton McKenzie.

And the star made sure to keep the crowd on their toes with lots of entertainment.

Wearing a green T-shirt with the Patriotic Alliance logo on it and a see-through blue lace skirt, with a visible black G-string underneath, Zodwa made her presence known in typical fashion.

The star shimmied across the floor to the stage where she chose to forgo the stairs leading up, in favour of bending over and climbing up on her hands and knees, giving the crowd a good look at her famous derriere. Once on stage, Zodwa flashed the crowd again by squatting down with her legs open.

“We are the future, we are now,” she told the excited crowd.

And Zodwa used her special entrance as a gimmick to push the agenda of the political party. She captioned the clip: “Take up space, when you are called, show up. If the staircase is far, make your own way @gaytonmck @patrioticalliance I always make a way.”

Another celebrity proudly backing a political party is Ntando Duma, who is a member of the EFF.

The actress has been visible at many a rally and campaign over the last few weeks, campaigning for votes for the opposition party.

She shared a video montage of her work on Instagram, writing in the caption: “When we said we are running the country we did not lie! We literally travelled from province to province, city to city and township to township.

“We did it with so much devotion and endearment in hopes for restoration of the black child’s dignity.

Ntando made a last-ditch attempt to canvass votes.

“We are so proud to have done this with so much passion and fearlessness. Now we hope for the people to have heard our cries and voices and do the right thing and VOTE FOR the Economic Freedom Fighters . We hope for a better way of living and better opportunities for our black people moving forward”.

And the star insisted that she was NOT paid to publish the post.

She added: “Not a paid post… I believe in the EFF”.