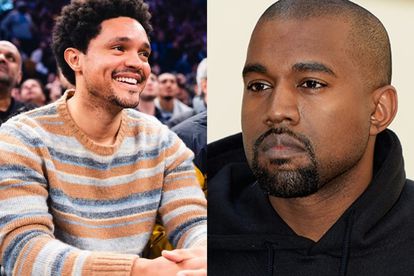 American rapper Kanye West has been suspended from Instagram for 24 hours after he directed a racial slur at South African-born comedian Trevor Noah.

Trevor Noah discussed the Kim Kardashian, Kanye West and Pete Davidson saga on an episode of The Daily Show.

“What [Kardashian is] going through is terrifying to watch, and it shines a spotlight on what so many women go through when they choose to leave,” he said as he went on to compare Kimye to his own experience witnessing abuse as a child.

“As a society, we have to ask ourselves questions. Do we wish to stand by and watch a car crash when we thought we saw it coming?” he continued.

This comes after Trevor ridiculed Kim for her controversial comments on women working hard – “get your f***** a** up and work.” Kanye then posted a screenshot of Trevor’s description as a South African comedian on Instagram with a racial slur.

Kanye mocked the comedian by using the offensive “k–n” slur to replace the original lyrics in “Kumbaya.”

YE SUSPENDED FROM INSTAGRAM FOR 24 HOURS AFTER TREVOR NOAH ATTACK

A meta spokesperson confirmed to Page Six that Kanye’s posts violated the company’s policies on hate speech and bullying and harassment. So, the rapper has been suspended. He is not allowed to post, comment or send any Direct Messages (DM) for 24 hours.

The publication also reports that if Kanye continues to violate the company policies, additional steps will be taken.

This follows Kanye’s attacks on both Pete and Kim in several since-deleted posts.