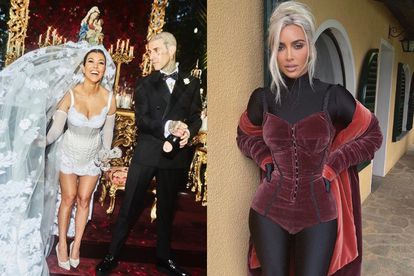 After Kris Jenner revealed that Blink-182 drummer Travis Barker moved to Calabasas for her daughter Kourtney Kardashian, fans are convinced that he actually moved for her sister Kim Kardashian.

The Kardashians have been trending every week since the release of their reality show on Hulu. On one of the episodes, Kris Jenner revealed that Travis Barker moved to Calabasas for her daughter Kourtney Kardashian.

“Do you want to know the real reason why he moved to Calabasas?” she asked.

“He said, ‘Because I knew she lived in Calabasas, and I knew she was the love of my life, and I didn’t even know her like that, but I just knew if I couldn’t date her or be with her because she was with someone else that at least I could live by her,” she continued.

Travis and Kourtney tied the knot in their third wedding ceremony on 22 May which was held at at Castello Brown castle in Portofino, Italy. The pair set tongues wagging everywhere they go because of their excessive Public Display of Affection (PDA). Kourtney is believed to be happy and in love with her soulmate after trying to make her relationship with her ex-boyfriend and “baby daddy” Scott Disick work for over 10 years.

FANS ARE CONVINCED TRAVIS MOVED FOR KIM, NOT KOURTNEY

The Kardashian’s fans did some digging and found out that Travis actually had a crush on Kourtney’s younger sister Kim. Travis confessed to being into her in his autobiography Can I Say: Living Large, Cheating Death, and Drums, Drums, Drums in 2015, according to Unilad.

The drummer referred to his now-sister-in-law as “’f***ing hot” adding that she’s “eye candy.”

“I’m really happy for Kourtney and travis but something about him having a huge crush on kim before her rubs me the wrong way,” tweeted @rubymmonte.

“I  saw a Tiktok about travis barker liking kim before her dated kourtney and I thought it was fake but he literally wrote about having a crush on her in his book and talked about it multiple times??? he knew kourtney back then too this is so weird,” tweeted @ANTlOVO.