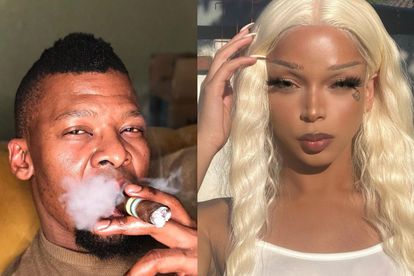 A proudly transgender woman who goes as Demi The Doll on social media made bombshell allegations against actor Vuyo Dabula over an Instagram live today (19 November).

Demi The Doll alleges she had an affair with Generations: The Legacy star Vuyo Dabula.

“How it started was I found him stalking my Instagram, twice, he was watching my story and I saw blue ticks and I thought he was cute and whatever,” she said.

The Instagram “public figure” explained that she screenshot a picture of him under her views and a friend responded to her saying that he is into transgender woman. She went on to say that she sent him a Direct Message (DM) on Instagram.

Demi The Doll alleges that they met two to three days later. She also implied that she had an affair with him.

DEMI: ‘HE IS A TRANNY CHASER’

Demi thereafter alleged that she did not know he was married. She thought he was a single father.

“He said he is a single father, and you must know I do not watch Generations… And the thing is I did not even know he had a wife…Is he married, why is there no information about his wife?” she said.

She said that she only found out he was married when she started investigating him. Demi The Doll went on to say that she has three more but they are cool so she won’t spill.

“I’m here for one reason only and that is because he is a tranny chaser, he’s trash. He slept with other women,” she continued.

Alleged “receipts” were shared on her Instagram story which imply the affair took place around the time of the Amapiano awards.

“And I’ll say it again if you’re ashamed of trans women then don’t sleep with us and tell your wife to get a strap for you,” she wrote on an Instagram story.

She thereafter shared screenshots of what is allegedly a conversation between herself and Vuyo. Demi The Doll affirmed that she is a proud transgender woman.

“And I am proudly transgender!!! I didn’t fight all my life to be who I am to keep secrets for men who ain’t s***,” she continued.