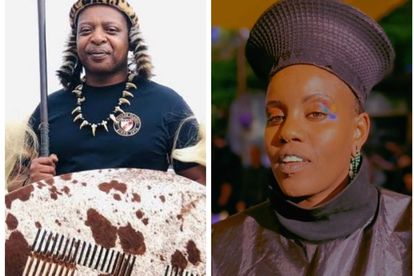 Musician Toya Delazy was labelled a traitor for supporting Prince Simakade as the Zulu King. Image via Twitter @mashiane_za, @toyadelazy/Instagram

Musician Toya Delazy was labelled a traitor for supporting Prince Simakade as the Zulu King. Image via Twitter @mashiane_za, @toyadelazy/Instagram

Musician and Zulu princess Latoya Nontokozo “Toya Delazy” Buthelezi has publicly put her weight behind Prince Simakade as the AmaZulu king, going against her grandfather, Prince Mangosuthu Buthelezi, who is in support of King MisuZulu for the throne.

The Funani singer took to Twitter on Sunday 14 August to congratulate Prince Simakade as the king, much to the disappointment of many tweeps who slammed her and labelled her a traitor.

BATTLE FOR THE RIGHTFUL AMAZULU KING

The battle for the throne is still on at the Zulu royal house, with the family divided between Prince Simakade and King MisiZulu.

On Saturday 13 August, Prince Simakade was traditionally crowned as the king by a family faction during a ceromony called ukungena esibayeni (entering the kraal). Some family members believe he is the rightful king by virtue of being late King Goodwill Zwelithini kaBhekuzulu’s eldest son.

On the other hand, King MisuZulu kaZwelithini is due to perform the same ceremony this weekend, following the passing of his father King Goodwill Zwelithini kaBhekuzulu last year.

According to SABC news, AmaZulu traditional Prime Minister, Prince Mangosuthu Buthelezi, has said that the ceremony is not the anointing of the king as many people think but rather a ritual of well-wishing and pledging loyalty to the new king.

Buthelezi further explained that once King MisuZulu enters the kraal, a member of the royal family will state the passing of the late monarch, and that King MisuZulu has taken over as king of the nation.

Prince Mangosuthu Buthelezi has previously stated that King MisuZulu is the rightful monarch as his late mother Queen Mantfombi Dlamini Zulu was a royal princess and it was the Zulu nation that paid lobolo for her when she was to marry King Zwelithini, as per tradition. In addition, he was announced as heir to the throne as per the will of his mother who was regent when she passed.

Prince Simakade’s mother and King Goodwill Zwelithini never married and she was not from royalty.

Following Prince Simakade’s ceremony, Toya Delazy tweeted that she stands for the truth and believes he is the rightful king as she congratulated him.

“You were both born of the most beautiful soul I have ever met – udlokobane – siyanithanda bantwana [we love you royal children].

‘GRANDPA WILL NOT BE HAPPY’: TWEEPS

Toya Delazy’s tweet was slammed by tweeps who called her a traitor for not supporting King MisuZulu like her grandfather, Prince Mangosuthu Buthelezi.