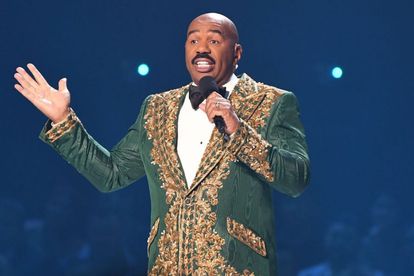 Steve Harvey returned “by popular demand” to host the 70th Miss Universe pageant – but not everyone was impressed.

Sunday night marked the TV star’s sixth consecutive year as a host of the prestigious pageant. But midway-through the competition viewers on social media had already had enough of him.

In 2015, he infamously named the wrong winner as Miss Colombia Ariadna Gutiérrez, when in actual fact Miss Philippines Pia Wurtzbachwas the rightful contestant to take the crown.

In 2019, Miss Malaysia Shweta Sekhon called out the Family Feud host for reportedly naming Miss Phillipines Gazini Ganados as the winner of the national costume category.

But it was his question to Miss India – who went on to win the Miss Universe title – that had viewers irate.

Whilst Steve asked fellow Top 16 contestants about their goals and accomplishments, he had a bizarre request for India’s Harnaaz Sandhu.

He asked: “I hear you do some pretty good animal impersonations. Let’s hear your best one.”

The beauty queen – known for her female empowerment charity work – happily took the embarrassing moment in her stride and delivered an impression of a cat!

But viewers did not find the incident funny.

One tweep posted: “Having Miss India make CAT sounds on International TV was degrading and disrespectful”.

On Twitter, the host trended for all the wrong reasons.

Viewers of Miss Universe demanded that the actor and author be replaced with someone else next year.

“Steve Harvey gives me second hand embarrassment as a host”

“Why are we still letting Steve Harvey host the pageant?”

“How long is Steve Harvey’s Miss Universe host contract? Asking for myself. Can we get someone else please?!”