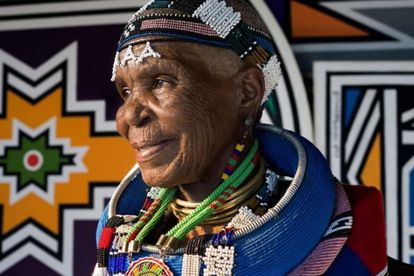 South African Twitter users are enraged following the news of the robbery and attack on Ndebele artist Esther Mahlangu on 19 March.

ESTHER MAHLANGU ATTACKED AT HER HOME

87-year-old artist Esther Mahlangu was robbed and attacked at her home at Siyabuswa near KwaMhlanga in Mpumalanga. The act, which has been “described as “shameful” occurred when she was preparing for an afternoon nap.

She had locked all the doors but noticed a man gained entry into her home. He punched her in the face and tied her up while ransacking her home. She could remember what happened after, but when she regained consciousness she noticed that firearm and money was stolen from her safe.

“The old lady reported that she cannot recall what happened thereafter. However, when she regained her consciousness, she realised that her house was ransacked and her firearm, as well as money, were stolen from the safe,” said the Mpumalanga SAPS in a statement.

“The woman sustained some bruises on her face and the matter was reported to the police at Siyabuswa whereby a house robbery case was opened, hence the manhunt,” the SAPS continued.

Twitter users were enraged over the news of Ester’s attack. Take a look…

“They did what to Esther Mahlangu? South Africa is a crime scene and we have an incompetent government that will never do anything about it,” tweeted @kgadi_ZA.

“One can’t blame Gogo Esther Mahlangu for keeping a firearm. We live in a country where women & girl  children are harvested,” tweeted @DimitryHlonisky.

“My heart breaks that an international icon like Esther Mahlangu can be assaulted at the age of 87  in her own home!!!  I hope they find the perpetrators soon,” tweeted @FaithCollett3.