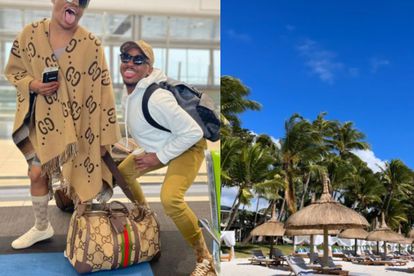 Somizi Mhlongo is rumoured to be on vacation with Mihlali and her rumoured husband Leeroy Sidambe. Images via Instagram @somizi @mihlalii_n.

Somizi Mhlongo is rumoured to be on vacation with Mihlali and her rumoured husband Leeroy Sidambe. Images via Instagram @somizi @mihlalii_n.

Controversial entertainment blogger Musa Khawula shared a video of media personality Somizi Mhlongo embarking on a flight with influencer Mihlali Ndamase and her rumoured husband Leeroy Sidambe – via a tweet on Wednesday 3 August.

IS SOMIZI ON VACATION WITH MIHLALI AND HER RUMOURED HUSBAND?

Musa Khawula claimed that Somizi Mhlongo is on vacation with influencer Mihlali Ndamase and her rumoured husband Leeroy Sidambe. The entertainment blogger claimed that Mihlali and Leeroy got married in a traditional wedding which was disguised as a housewarming party for Mihlali’s new home. Take a look…

Somizi shared a video on TikTok of himself embarking on a flight – covered in Gucci head to toe as usual. However, Musa claims Mihali and Leeroy are seen in front of him. Take a look…

Somizi is also on vacation with his friend Ndo Maleho. It is unclear whether Somizi and Ndo are on vacation with Mihlali and Leeroy but they both posted pictures on a scenic vacation. Take a look…

MOHALE’S ‘TELL-ALL’ SPECIAL HAS BEEN RELEASED

Somizi’s vacation comes just in time for the release of his estranged husband Mohale Motaung’s Showmax special. Mohale: On The Record released this morning (4 August) and he is already trending on Twitter.

So, what can you expect from the special? Mohale’s side of the story after Somizi mentioned Mohale several times in the fifth season of his reality show – Living the Dream with Somizi.

“A lot has been said about me, both true and untrue,” he said.

“ With all the misinformation in the public domain, it is my responsibility to correct any propaganda as I represent not only myself, but those that may have experienced a story similar to mine. I would also like people to truly get to know me for who I am, as opposed to who they have assumed me to be,” he continued.

Take a look at the trailer..