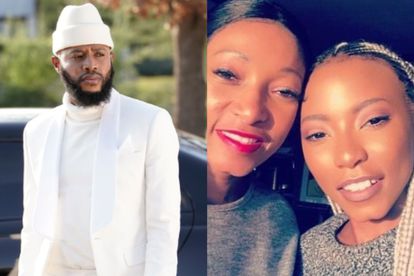 Showmax releases ‘Mohale: On The Record’. Images supplied and via Instagram @palesamad.

Showmax releases ‘Mohale: On The Record’. Images supplied and via Instagram @palesamad.

South African actor Mohale Motaung, who is the estranged husband of Somizi Mhlongo, slammed Palesa Madisakwane and Bahumi Mhlongo on his Showmax special which was released on Thursday 4 August.

Mohale: On The Record officially released on Thursday 4 August. The Showmax special was hosted by Aldrin Sampear. Sampear brought up an episode of Mohale’s estranged husband Somizi’s reality show – Living the Dream with Somizi where his daughter and “baby mama” discussed Mohale.

The Idols SA judge has a 27-year-old daughter named Bahumi with actress Palesa Madisakwane. The pair discussed Mohale being Somizi’s “fan” on an episode of his reality show.

“He (Somizi) met him (Mohale) at a book launch and he was a fan, he wanted an autograph. We already know that the dynamic there was fan celebrity,” said Bahumi on an episode of living the Dream with Somizi season five.

Palesa also referred to Mohale as Somizi’s “little boy toy” and said she just stood back and watched because he had multiple weddings without paying damages for their daughter Bahumi.

THE ACTOR: ‘DEFINITELY NOT A FAN’

So, how did Mohale feel about that? Well he stated that he is definitely not a fan and opened up about how his relationship with Somizi went down.

“Look I can’t really speak for them. That is probably how they saw it. They spend a lot of time with Somizi around people who are his fans. I was definitely not a fan,” he said.

Mohale claimed that Somizi sent him a Direct Message (DM). He allegedly made a picmix of their pictures and said that’s how they would look in their future. The actor then claimed that Somizi brought his friends along. So, it wasn’t really a date but it was the day they called their “anniversary”.

Take a look at the trailer here…