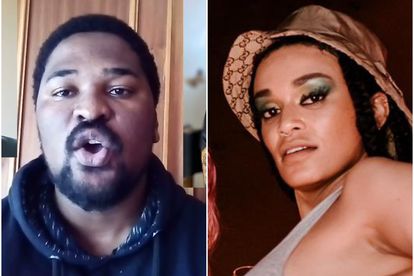 Slik Talk and Pearl Thusi may be the furthest from friends, but they have a few things in common: one of them being the inability to back down from a fight.

The Youtuber and actress have been embroiled in a bitter war of words after they both exchanged nasty insults at each other over the weekend.

Now Slik Talk is doubling down on his attack on Pearl Thusi, by essentially calling her a “fake” person.

Taking his YouTube channel on Sunday, 20 March, Slik Talk responded to shady comments about him made by Pearl Thusi during an Instagram Live video.

In it, Pearl slams the blogger’s lack of skills and offers tips on how he can improve. In a “kill them with kindness” moment, Pearl also offers to buy Slik Talk a new wardrobe, camera and tripod in order for him to up his game.

But Slik Talk was not having the back-handed compliment, and responded, claiming the Fistful of Vengeance star is “not genuine”, “vile” and “mean-spirited”.

He said in a new video: “I’m not surprised by your attitude. I’ve always known that this is the type of person you are. No sympathy, no remorse whatsoever.

“She only likes you when you’re relevant. You’re only to the bag, and that’s it. There is nothing about you that tells me that you are a genuine person”.

“The difference between me and you Pearl Thusi is I know who I am. I know I make mistakes, I know I am rude sometimes, but I don’t pretend to be something I’m not. Unlike you who pretends to be a good person and kind. But you are the exact opposite”.

Despite a second take at shading her on his YouTube channel, Pearl Thusi remained unfazed by joking with her Twitter following.

She posted: “I’ve never ever seen anyone have more fun than me on this planet.