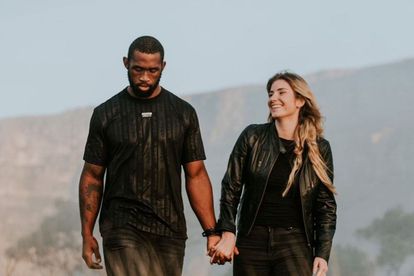 Springbok captain Siya Kolisi jokingly got back at his wife Rachel for excluding him when posting a photo of her favourite people, on 15 January.

RACHEL KOLISI: ‘MY FAVOURITE PEOPLE IN THE WHOLE WORLD’

Rachel Kolisi was soaking up the sun on a vacation with her two children Nicholas and Keziah as well as Siya’s siblings Liyema and Liphelo. Siya and his siblings share a mother who unfortunately passed away in 2009 which left Liyema and Liphelo bouncing from orphanages to foster homes. This was before Siya and Rachel were financially stable enough to adopt them in 2014.

She said she was enjoying the last few days before the children go back to school. According to the location of the post, they were in Mozambique. Take a look…

“Last few days soaking up my favourite people in the whole world! ????,” the post was captioned.

Siya seemed to have felt excluded from Rachel’s “favourite people” post. So, he decided to post his own favourites and strategically cropped  Rachel out of the photo.

“My favorite people in the whole ???? earth ???? @rachelkolisi shots fired back,” he captioned the post.

“Also you cropped the whole me out ???? savage,” commented Rachel.

ALSO READ: ‘Decided to take a dive and do it’: Rachel Kolisi goes back to school!

The Springbok captain made up for being “childish” two days later by posting a series of romantic snaps with Rachel.

Rachel and Siya have been married for five years. The pair reportedly met at a dinner party in Stellenbosch in 2012. Siya said Rachel initially played hard to get but afterwards she admitted she liked him too.

“I knew I liked her and had to tell her, It was scary. I asked her to lunch and that’s when I told her. She played hard to get in the beginning, but eventually admitted it as well. The rest is history,” wrote Siya on their wedding website.