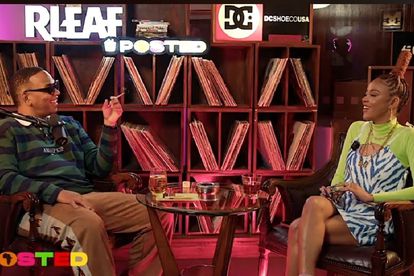 Rapper Sho Madjozi has reacted to her interview with fellow rapper Da L.E.S in which she appeared ‘drunk’. Image via YouTube screenshot: Posted with Da Les & Friends

Rapper Sho Madjozi has reacted to her interview with fellow rapper Da L.E.S in which she appeared ‘drunk’. Image via YouTube screenshot: Posted with Da Les & Friends

The award-winning rapper appeared on Da Les’ podcast Posted with Da Les & Friends on Sunday 13 November where she was promoting her children’s book Sho Ma and the Stars.

During the interview, the John Cena hitmaker unpacked various topics, including race.

The rapper told a story about how she found out that her father was white despite him being in her life.

Sho Madjozi says she was 8 years old when she found out her dad was white and for her, that was strange because she thought “white” was a term used for people who were against them (black people) and she did not consider her father to be a part of that group of people.

While the musician and the former Jozi rapper discussed other topics, viewers could not help but notice that Sho Madjozi appeared “drunk” in some parts of the interview.

In one part, Da Les is trying to find out more about Sho Madjozi’s book but the Huku hitmaker is only hilariously focusing on the nose of the cartoon character on the book cover.

Reacting to the interview Sho Madjozi indirectly admitted to having a little too much to drink.

“Da Les: let’s have a nice wholesome interview over a few drinks.

Watch the full interview in the YouTube video below:

Sho Madjozi’s interview left tweeps in stitches and some were curious about Da Les’ dealer because the same thing happened to podcaster MacG when the DJ interviewed him on Podcast and Chill.