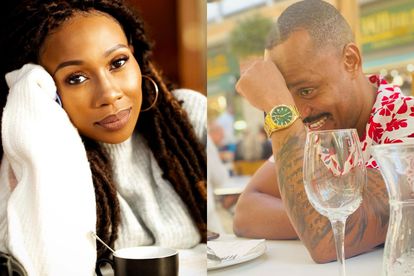 Dineo Ranaka and her ex-boyfriend Sechaba Thole have been trending on Twitter after a video of her lashing out at him went viral.

“Talk about ego, I got a bigger one than yours. Of course you’re going to get anxiety when I wake up and I step presence in your life. ‘Hey Dineo I don’t call you because you give me anxiety’. I’m too big,” she added.

Twitter user @Julluca1 seems to have run into Sechaba and asked him if he had a headache. This was a reference to Dineo saying when wakes up in the morning Satan gets a headache. Sechaba agreed that he did have a headache after that rant and they both laughed. Take a look…

Twitter users praised Sechaba for remaining cool and calm while Dineo lashed out at him.

“Give Sechaba a 100 year old whiskey please. That man is leadership. Remaining this calm while you are being shouted at and provoked,” wrote @Dukes_Mokoena.

“I take my hat off to Sechaba for remaining so calm and composed,” wrote @StaggaSays.

“Sechaba is leadership, stay calm. Humble up, keep quiet, let the Dineo’s speak until their tongues run dry. Don’t even try to respond, you will never win arguments with women,” wrote @umakanika.