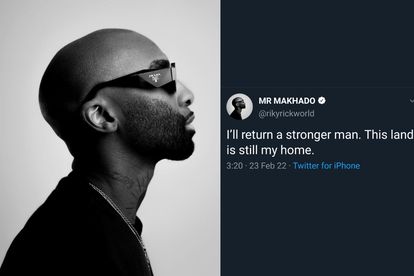 The 34-year-old rapper shared a cryptic tweet about “returning a stronger man” and the land being his home earlier this morning before he passed on.

“I’ll return a stronger man. This land is still my home,” tweeted @rikyrickworld.

The tweet appears to be inspired by lyrics from his song Home. Take a look…

The harvest blown again this year
But I’ll return a stronger man
I’ll return to me my homeland
No grave shall hold my body down
This land is still my, my home

Hours after the tweet and rumours of his suicide on social media, his family confirmed the rapper’s death. The family later released an official statement about Riky Rick’s passing.

“Son, husband, father, brother and uncle, Riky ‘Ricky’ Makhado (34) sadly passed away in the early hours of this morning (23rd February) in Johannesburg,” read the statement by the family.

“Affectionately known as Riky Rick across the globe, he was deeply loved by his family, friends and the entire entertainment industry. His love for family, friends, and community is well known. Riky’s nurturing and developing of young musical talent is well documented and will forever be remembered,” the statement continued.

ALSO READ: Who was Riky Rick? Five things to know about the late rapper [photos]

EVERYTHING WE KNOW ABOUT THE RAPPER’S DEATH SO FAR

“Riky spoke about his depression and he was doing okay. He stopped taking drugs many years ago and that was never a secret. I don’t know what might have triggered this. But we will pray for Bianca and the kids,” said a close friend to Drum.

ALSO READ: The ones he left behind: Inside rapper Riky Rick’s ‘family album’