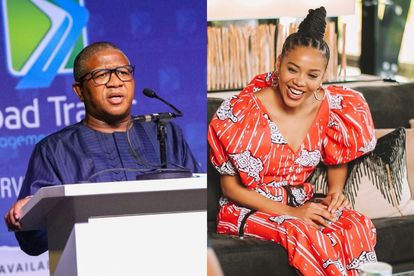 Since teaming up with Tanzanian singer Nandy on a song titled Kunjani in October 2021, award-winning artist Sho Madjozi has been out of the spotlight. Her last Instagram post was on 4 December 2021.

After a tweep questioned what she might be up to, Minister of Transport Fikile Mbalula weighed in and seemed to have some answers… Taking to Twitter on Monday 21 February, Mbalula said the John Cena hitmaker “disappeared with that talent”.

WHERE IS SHO MADJOZI?

Sho Madjozi kicked 2021 off on a high note. In January, she was selected for YouTube’s Black Voice class alongside the likes of Lasizwe and controversial podcaster MacG. The talented artist bagged a billboard in Times Square, New York for the achievement. She also won the Female Artist of the Year award at the South African Music Awards (Samas) in July.

Her collaboration with Tanzanian talent Nandy, Kunjani, was released in October 2021, since her last Instagram post in December, she has been missing in action…

FIKILE MBALULA HAS THE ANSWERS

A tweep, who wondered what Sho Madjozi might be up to, asked other tweeps for some answers. On Monday 21 February, he tweeted: “Guys, what happened to Sho Madjozi?”

While other tweeps had the same question, Fikile Mbalula weighed in with some shade.

Responding to Fikile Mbalula, tweeps did not take his shady comment lightly. One tweep wrote: “You are so quick to answer things which are not relevant to your portfolio.”

“The way you disappeared when you were supposed to fix the railway lines?” wrote another tweep.

“Gone just like my one tyre that hit a pothole.”