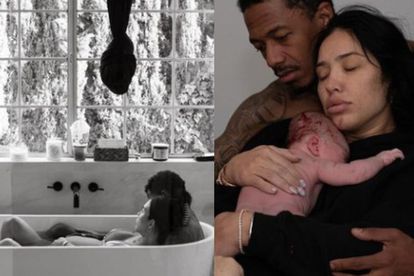 American TV host Nick Cannon and American real estate agent and model Bre Tresi welcomed their baby boy to the world via a home birth as revealed in an Instagram post on Monday 25 July.

Nick Cannon announced that he was expecting a baby with model Bre Tresi in January this year. This is Cannon’s eighth child but Tresi’s first. The news of his eighth child came just a month after he lost his seventh child – baby Zen who he shared with Alyssa Scott. The baby was born on 28 June.

Tresi has since announced that she gave birth to Cannon’s baby boy via an all natural, unmedicated home birth. Take a look…

“I did it. An all natural unmedicated home birth. This was the most humbling / limit pushing yet awakening and completely empowering experience,” she wrote.

“I can’t thank my team enough for delivering my son safely. This experience has changed me forever and I couldn’t of asked for a more amazing and supportive partner. Daddy showed the f up for us.. I couldn’t of done it without you. ???? I can’t believe he’s here ????,” she continued.

She went on to say that the vlog of her home birth is now live on her YouTube channel. The 11-minute-long video is “raw”. So, viewer discretion is advised. You can watch the blog here.

“I noticed he wasn’t crying,” she said explaining that the midwife used an air tube on the newborn and when he finally began to cry.

“The best sound I ever heard,” she continued.

The Wildin’ Out host is rumoured to be expecting his ninth child with DJ Abby de la Rosa. He is also rumoured to be engaged to a mystery woman after he posted photos with a ring on Instagram but some believe it may just be for a movie.

Turns out it was a music video.