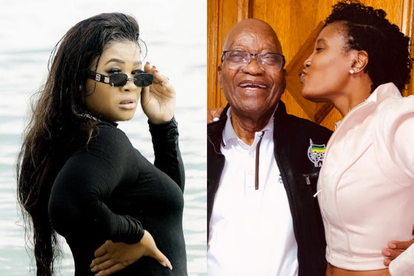 South African amapiano musician Lady Du received high praises from Jacob Zuma’s daughter Duduzile “Dudu” Zuma early on Thursday morning. This after Lady Du recorded herself singing a song dedicated to the former president, who as usual, has been the subject of many controversial conversations.

Not everyone thought the song was great though.

Lady Du has made it clear to her many fans that she is a Zuma supporter. The singer shared a video of herself singing a song that she wrote for Zuma. In the clip, she can be heard saying “I want South Africans to support by starting a challenge after listening to this song.”

She then starts singing:

Daddy’s girl Dudu Zuma loved the song and wasted no time taking to Twitter on Thursday 9 August, where she shared the clip on her page while thanking Lady Du for making the “hit song.”

“Everyday We Celebrate H.E President Jacob G Zuma Because #uZumaYiStar Thank You @Ladydu_sa. For Being Brave And Creating Such A Celebratory Hit Song About The People’s Forever President #PresidentZuma. It’s Thursday Guys Let’s Put Our Speakers Up!,” she wrote.

Many agreed with Dudu about the song being amazing and had this to say:

“Jacob Zuma is a star”

“I think we need to have a national Zuma day”

Not everyone is feeling the vibe though

While a lot of people showered Lady Du with compliments on the song, others didn’t believe she had a hit on her hands. Some people even resorted to warning the young artist about singing for the president whose name long ago became synonymous with controversy:

“Someone please warn @Ladydu_sa not to involve herself in political fights, this is above her and she will get herself blackballed for being tjatjarag.”

“You can post about the wonderful loving being that is Zuma until your fingers fall off and they block 50 of your Twitter accounts, it still won’t make Jacob Zuma an honorable man. Jacob Zuma betrayed his own people, betrayed us all, and doomed our country.”