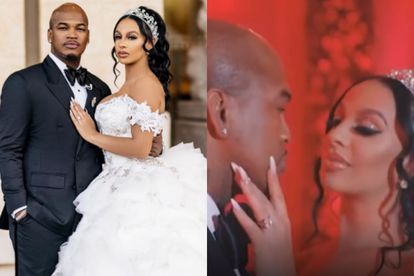 American singer Shaffer Chimere Smith, popularly known as Ne-Yo’s wife Crystal Smith has filed for divorce and claimed he fathered a child with another woman according to a report by Page Six on Thursday 5 August.

Page Six reports that Ne-Yo’s wife Crystal has filed for divorce from the singer. She alleged that he fathered a child with another woman.

“Recently fathered a minor” with his “paramour,” she claimed in documents seen by the publication. Crystal filed for divorce on Monday 1 August and listed their date of separation as 22 July. She also called their marriage “irretrievably broken with no hope for reconciliation.”

This comes after the couple renewed their vows on 24 April this year. They held a lavish red-themed ceremony in Las Vegas. However, the pair announced their divorce in 2020 but reconciled their love later that year.

Ne-Yo and Crystal first got engaged in 2015 and got married in 2016, when they welcomed their first child together. They have three children together – Shaffer (6), Roman (4), and Isabella (1). Ne-Yo also has two children – Madilyn (11) and Mason (10) from a previous relationship with Monyetta Shaw.

Crystal took to Instagram with bombshell allegations against her husband. She claimed that she shared her husband with “women who sell their bodies to him unprotected.”

“Eight years of lies and deception, eight years of unknowingly sharing my life and husband with numerous women (sic) who sell their bodies to him unprotected. Every last one of them. To say I’m heartbroken and disgusted is an understatement,” she wrote.

Crystal went on to claim that he asked her to stay but she refused.

The post has since been removed but not before it was shared on Twitter. Take a look..