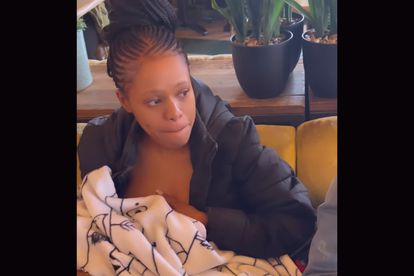 Natasha Thahane is beleieved to have given birth. Image via Instagram @natasha_thahane.

Natasha Thahane is beleieved to have given birth. Image via Instagram @natasha_thahane.

South African actress Natasha Thahane hinted that she has given birth as she is seen breastfeeding in her Instagram Stories which was posted on Wednesday 11 May.

Natasha Thahane announced that she is pregnant with a beautiful photoshoot shared to Instagram on 8 March. The actress is believed to have given birth towards the end of April.

Natasha shared a snap of herself without a visible baby bump On Wednesday 11 May leading many to believe she has given birth. Take a look….

The actress also shared a video of what appears to be her family sharing a meal. She was seen at the end breastfeeding her baby. It is unclear whether the baby is a boy or girl as yet.

IS LORCH THE ‘BABY DADDY’?

Natasha had been in an on and off relationship with Orlando Pirates player Thembinkosi Lorch since they were first spotted together on “baecation” in Zanzibar in June 2021.

The pair posted photos of each other but later removed. They then posted Instagram stories proving they were still together. However it wasn’t long before they posted cryptic Instagram Stories and unfollowed each other.

The pair are still not following each other on Instagram. Lorch has remained mum on whether he is the father of Natasha’s baby or not. Lorch has also not shared any photos of Natasha since she announced her pregnancy, he has only posted photos of himself.

So, it is unclear whether Lorch is the Blood & Water actress’ “baby daddy.”

Tweeps are impressed with her body. Take a look…